Bill Belichick on LeSean McCoy: "he can make 4 guys miss in a phone booth" 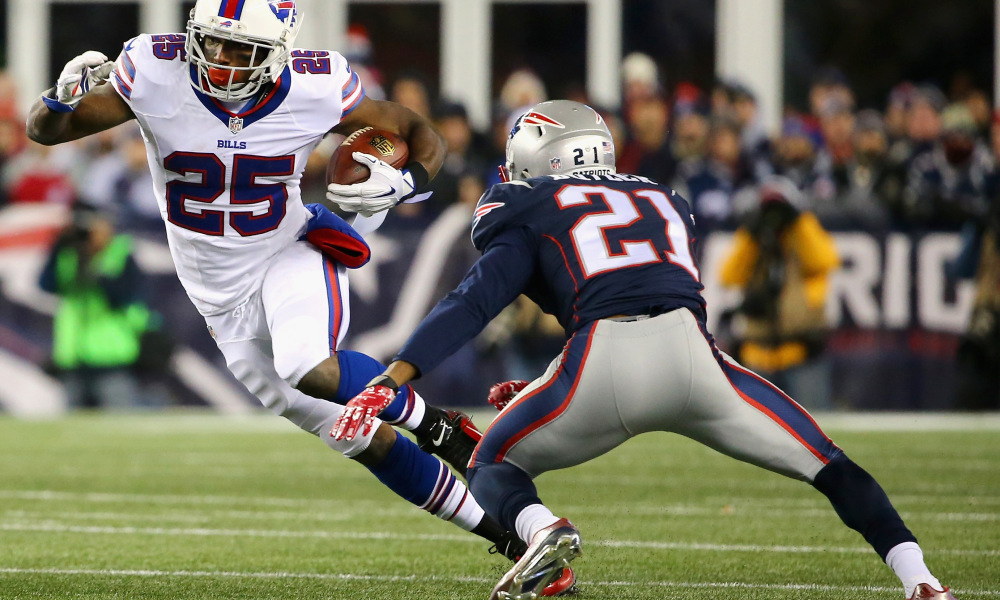 Bill Belichick's daily press conferences can be insanely entertaining when he gets down a rabbit hole. After watching mind numbing hours worth of film, he has an intimate idea of how players are used in an opposing system. LeSean McCoy, the running back for the Buffalo Bills, is the spoon that stirs the Bills offensive soup. Belichick knows that stopping Shady McCoy means the Patriots will be in excellent position to win. Hopefully the Patriots defense doesn't have to tackle McCoy in a phone booth because Belichick does not seem too confident his players can even complete that task.

McCoy has been dynamite for the Bill this season. He has over 1000 yards from scrimmage, which is triple the next highest on the Bills offense. The Bill are sitting at a 6-5 record and are 7th place in the AFC playoff picture, and they are only on the outside looking in because of a tiebreaker. McCoy has been the key to first year head coach Sean McDermott's success.

Taking out the debacle of a game that was Nathan Peterman throwing 5 picks in the first half, the Bills have received steady quarterback play from Tyrod Taylor.

How many snaps it takes for QBs to throw picks.
So Brady has thrown a pick every 356 times he's lined up under centre.
Nathan Peterman has thrown a pick for every 7th snap.
DeShone Kizer isn't a million miles behind him either. pic.twitter.com/spxkygcuTY

He has done nothing spectacular but thrown for over 2000 yards and 12 touchdowns with only 3 picks. Taylor is very athletic and can make tough throws while moving in the pocket. All these positives are fine and well but McCoy needs to be running well for Taylor to succeed. If Belichick can get his front 7 to limit the ground game of McCoy it makes Taylor's job infinitely harder with the way the Patriots secondary is playing.

Despite how the Patriots as a whole have played in their current 7 game winning streak, this is a desperate Bills team who always plays well at home against the Pats. This unheralded Bills squad wants nothing more than to spoil the Patriots bid for home field advantage throughout the playoffs and end the long playoff drought of their own.

"This challenge is this challenge and it's a hard challenge," Belichick said. "It's Taylor, it's McCoy, it's Clay, it's the receivers, it's a big offensive line, it's a jumbo tight end, it's a power running game with a back that can, literally, run the ball from sideline to sideline and make four guys miss in a phone booth. McCoy can take any play and turn it into a play that doesn't look like any other play you've seen before."

While McCoy has been stellar at times and drives this offenses success, he is not satisfied with his play and believes he has another gear.

"I could be more consistent," McCoy said Wednesday. "[It has been] up and down, I think. Some games [I was] lights-out, and other games, it’s kind of, ‘Ahh.' Some plays, I’m doing really, really well [and] some plays I’m not.

No matter what the back thinks of his play, Belichick has to fear this space weapon because the Patriots run defense is ranked a measly 22nd in the league. Additionally, they have allowed a 100 yard rusher in four of the last five weeks. Not a recipe for success on the defensive end.

This matchup between McCoy and the entire defense is going to come down to a battle in the trenches. How can Alan Branch, Lawrence Guy, Malcolm Brown control the line of scrimmage? If they do, it'll force McCoy into tougher runs and help the linebackers come downhill to make tackles. Also can the Patriots offense get a lead and force the Bills to be one dimensional? That would make the run defense have far less responsibility.

The linebackers are maybe even more crucial to stopping Shady. Kyle Van Noy was a limited participant in practice on Wednesday with a calf injury so his health will be important to watch.

#Patriots injury report. That time of year when this list starts to get longer and longer. Brady, Cannon, Hogan, Reilly, Waddle the DNPs. pic.twitter.com/zzP7ODFe5q

In addition to making tackles in the run game, the linebackers, and maybe some safeties will be charged with covering McCoy out of the backfield and making tackles in space. This is where Shady can get the best of the Patriots defense and the whole unit must swarm McCoy whenever he touches it. Elandon Roberts will be key in the tackling game as will Devin McCourty and Duron Harmon who, as the deep safeties, may need to come up and make tackles in space. If the defense can control he line, make tackles in space and limit McCoy in the passing game they will have a huge advantage in this game. The tables can turn easily with a running back of his caliber so the whole defense will need to key in on him every down.

Check me out on twitter @jakescearbo to talk more about this huge road game on Sunday or peep my website at jakescearbo.com to read more blogs written by me!