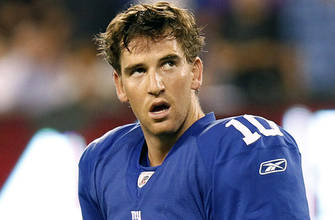 Note: I googled 'Dumb Stupid Eli face' for this picture.  Hope you like the one I picked

I got in trouble for not writing a predictions blog for the Miami game over the weekend.  I guess our editor in chief does not believe in drinking yourself into a stupor for 4 straight days.  Lesson learned on that one.

Normally I use this space to write a recap of my picks, and I exclusively write about the Patriots.  However the breaking news that Eli Manning will be benched in favor of Geno Smith, I’ll do the next best thing and dance on some graves.

Eli Manning – It always bothered me that the younger Manning brother got so much shine.  He came into the league in 2004 and immediately made a stink when the Chargers drafted him 1st overall.  I always thought that was a bitch move.  Players have gotten drafted by stinky teams before.  Only Eli and John Elway shot their way out of town without playing a down. (Ok, maybe there are more than that, but my dumb brain can only remember those two).

Without watching a ton of Giants games, Eli has seemed like a serviceable game manager through his career.  He has the hardware and he put some egg on my face with both his championships.  Admittedly he has some instances of balling out.  I’m still haunted by that helmet catch to David Tyree (Lucky) and that Super Bowl pass to Mario Manningham (Pinpoint accuracy and skill), but I just never bought into him.  I always thought his name recognition got him more shine than his actual talent.  It’s nice to see his 210 game start streak snapped, not by injury, but because he STINKS and the Giants STINK.

New York Fans – You have those two Super Bowls and I can never get them back.  That being said, I’ve never thought the Giants were really ever that good.  How many playoff appearances do the Giants have since Eli came aboard?  5 times in 14 years, and that’s in a pretty bad division.  The Cowboys, Redskins and Eagles have been anything but world beaters during those 14 years.  If they didn’t somehow get invincible in 2007 and 2011, they would be the definition of disappointing.  My question is, do NY fans actually think this guy is good?  Not even being a decent team for 9 out of 14 years has got to wear on them.  They talk like they are still top of the heap, but newsflash:  2007 was 10 years ago.  Stop living in the past.  (Boom Roasted)

P.S. 2-1 odds that Eli goes to Jacksonville for a reunion with Tom Coughlin.  I think they will actually be pretty good if Eli can work as a game manager with that defense and running game.