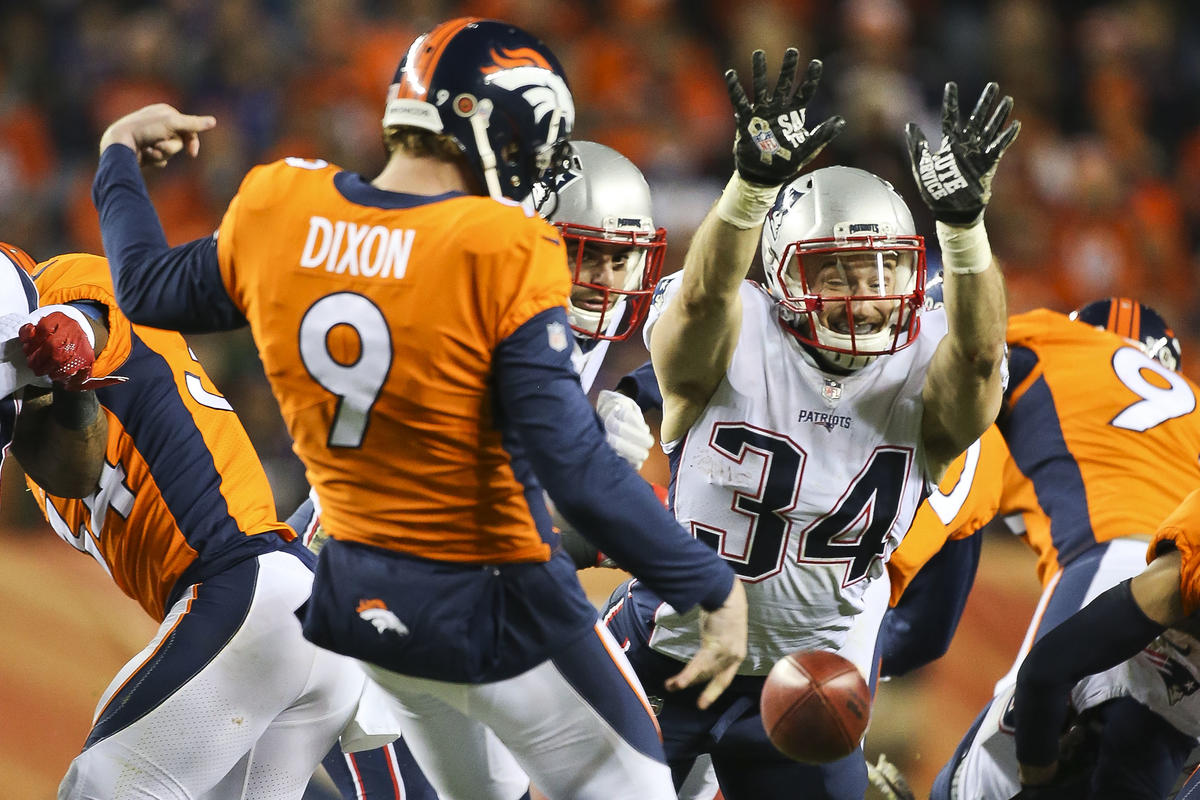 When someone questions Bill Belichick's prowess as a coach all they have to do is look at the full body of work from the Sunday night debacle that was Patriots-Broncos. The Patriots have struggled playing in Denver and have lost twice in the playoffs and once in the regular season in the last 4 season at Mile High Stadium. The effort in all three phases of the game ensured the Patriots would head to Mexico with a resounding victory that put the Patriots on the fast track to a top seed in the playoffs.

After a grossly quick three and out by the Patriots on the first drive of the game, lefty Ryan Allen punted away to Denver's Isaiah McKenzie who muffed it and the ball was recovered by the Patriots deep in the Broncos territory. A few plays later, Tom Brady found Rex Burkhead for a touchdown to put the Patriots up 7-0.

After the Broncos quickly drove down the field and kicked a field goal to make it 7-3, Dion Lewis preceded to take the ensuing kickoff 103 yards to the house and all of a sudden a rout was in the making. The offense and the defense started slow for the Pats but the special teams put both units into a favorable situation up 14-3 which completely changed the play calling. Winning the special teams game is gritty, sometimes ugly and always overlooked but in this primetime matchup it was the difference in the game.

Add in a blocked punt by Burkhead, dominating the field position battle on every kickoff and even drawing a 12 men on the field penalty with the punt team on, the special teams set up both the offense and defense for success.

Score a TD on offense AND block a punt on special teams?@RBrex2022 is doing it all for the @Patriots! #NEvsDEN #GoPats pic.twitter.com/Om8vR6fhOv


Last night was the first game since 1979 the Patriots special teams unit forced a takeaway, blocked a punt, and had a KR/PR for a TD

Brady ended up throwing for 266 yards and 3 touchdowns, the running game was relatively successful and the defense held Brock Osweiler to under 250 yards passing while forcing an interception but the tone was set by the special teams. They gave the offense a short field on multiple possessions and allowed the defense to be aggressive with their play calling because the Patriots were ahead for the entire game.

Overshadowed by the dynamic special teams play was the performance of the offensive line against the vaunted Denver front 7. Brady was only sacked once in this tilt and had all day the throw. This unit is hitting its stride at just the right time. Secondly, the defense made enough plays to consider this performance a success. Despite the fact that they still surrender chunks of yards on some drives, they have been limiting the scoring and have been forcing offenses into field goals rather than touchdowns. The defense has bought into the "bend but don't break" mantra. Also shoutout to Stephon Gilmore for playing lock down defense on Demaryius Thomas in his return to action. It will be exciting to see what this secondary can do if Gilmore and Malcolm Butler both are dominating the same game. Butler had a tough day against Emmanuel Sanders but has a knack for bouncing back after poor showings. These two will need to be on top of their game against the Oakland Raiders next weekend.

The Patriots all of a sudden have that November feeling where they are playing their best football but still have room for even more improvement. Belichick is going to have these guys firing on all cylinders with some tough road matchups left on the schedule.

Lesson of the day: do not ever discount the value of special teams because a dynamic effort that the Patriots unit had yesterday can change the course of a ball game very quickly.