After a couple of early season hiccups, the New England Patriots are rolling 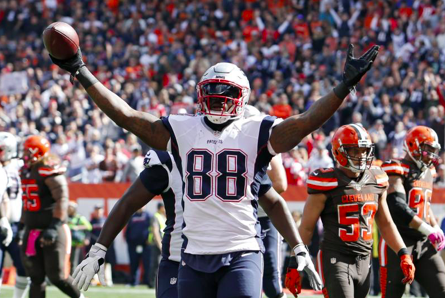 After a couple of early season hiccups, the New England Patriots are rolling. The Pats are locked head to head with Pittsburgh Steelers for that coveted extra week of rest that comes with finishing the season strong and entering the playoffs with the #1 seed.

A lot at Stake

I know a lot of people are upset about the Rob Gronkowski suspension, but just be thankful that it isn't a two-game deal. Gronk has been on fire the last couple of games, putting up 82 yards and two touchdowns against the Miami Dolphins then, moving the chains for to help set up those Burkhead touchdowns with 147 yards against the Buffalo Bills on December 3rd. Given the nature of the hit, the committee could have come down on number 87 much harder. Gronkowski is playing Gronk-tastic and the Patriots offense would be nothing short of hampered without him against Pittsburgh in Week 15, where most likely, the #1 seed in the AFC will be decided.


“Your actions were not incidental, could have been avoided and placed the opposing player at serious risk of injury,” -letter excerpt from NFL VP of Football Operations


With the Miami Dolphins coming up again in Week 14, the one-game punishment is a slap on the wrist. If we look at it on the bright side, Gronkowski gets an extra bye-week and will come back in rested and ready to manhandle the Steelers defenders.

The Pittsburgh Steelers (10-2) pounded their way to a Monday Night Football win over the Bengals which puts them back in the driver seat for a #1 playoff berth.

The New England Patriots (10-2) current sit at the #2 seed, but can steal #1 from the Pittsburgh Steelers when they lock horns in week 15.

The Tennessee Titans (8-4) are looking like they have the form to win the AFC South and are currently riding the 3rd chair playoff slot.

Kansas City Chiefs (6-6) After an epic start to the season, the Chiefs continue to slide … crashing into the wall at each upcoming turn and by the miracle of being in a horrible division, still hold the wheel that steers the post-season car. But with their last loss, the Chargers and the Raiders are now slipping in the teepee each night to watch the Chiefs sleep with murderous looks in their eyes. K.C. had better sleep with one eye open.

Jacksonville Jaguars (8-4) With the Jags putting down the lame Colts on last Sunday, they are in good position to make the playoffs, even if they end up losing to the Titans in Week 17.

Baltimore Ravens (7-5) Can the Ravens hold on to the 6th seed they have currently snatched with their rout of the Detroit Lions?

Fins, welcome to the Secret Cove … I mean ... Foxboro

The Miami Dolphins have to come up to New England and it might as well be the Secret Cove –where Dolphins are ruthlessly slaughtered and later fed to small Japanese children.

The lines opened up on Sunday evening with the Patriots as 14-point favorites … you don’t see many two-touchdown lines in the NFL (hence the secret cove reference) but to give credit where due, at BetOnline while checking the odds we find that the 14-point spread has already been pushed down to 11. This is a large movement that leads me to believe that there are some folks out there with a lot of money who think the Dolphins won’t lose by that much. However, check back on those odds later, because I wouldn't be surprised to see some U-shaped movement do to tons of late money coming in on the Pats … which will put the Pats back near that two-touchdown opening line.