The king of hypocrisy, Ray Lewis, makes his take on the Rob Gronkowski late hit 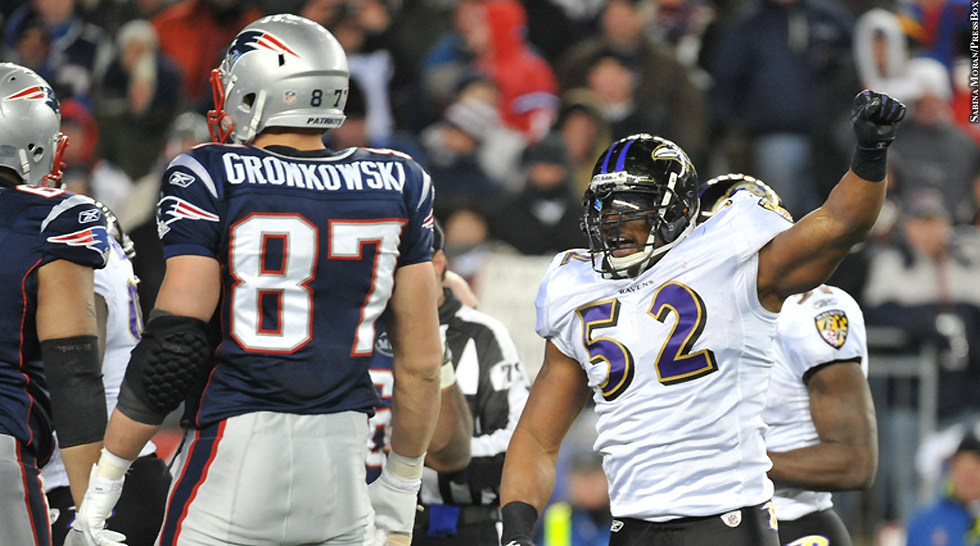 Rob Gronkowski's WWE style late hit has drawn takes ranging from deserving a hefty fine, or a single game suspension to the more radical like suspending him for the rest of the season and even arresting him for assault. The internet is a crazy place where large groups can band around insane ideas like arresting a contact football player for assault. No doubt Gronk deserves a one game suspension, but he may not feel satisfied seeing the inconsistency in the NFL rulings on suspensions this season. This is a great tirade from Steelers safety Mike Mitchell on the state of the game.

In any case, the former NFL players comprising sports media have been firing negative Gronk takes ever since the Buffalo game, the worst of which, came from former Ravens linebacker Ray Lewis.

He is a notorious Patriots hater so this type of discourse is nothing new. You know what they say, "if you can't beat them, be a jerk to them on national tv" (or something like that).

"That was probably one of the worst plays I've probably ever seen in football," Lewis said on Showtime's Inside The NFL. "That you would attack the guy from the back like that on a regular play? We are talking about just a regular football play. And for Gronk to take it to that level, I don't know. Does one game [suspension] do enough? I don't know."

Here is a video from the hit, even though you it has probably been shoved down your throat for the last 48 hours. Gronk has officially been suspended one game and will miss the Monday night tilt versus the Miami Dolphins. All the hate Gronk has received for his hit, which was perpetrated in a rage of frustration, is misguided, especially from Lewis who is the most vocal hypocrite in the media today.

Let us not forget that Lewis was a suspect in a murder case back in 2000. While he almost certainly didn't stab either of the two men who were killed that fateful night in Atlanta, the clothes he was wearing that night were never recovered and he ratted out two of his friends who were also present at the stabbing. Yes, this murder case has nothing to do with football but it discounts his word as invalid.

His character isn't just sketchy outside of football and he was arguably the most intense linebacker to ever play the position. If your telling me that Lewis didn't let the passion of football get to his head your crazy. Gronk made a mistake and owned it right after the game. He felt he wasn't getting calls and he took his anger out on the guy who was mauling him. Lewis has no right to say that was one of the worst plays he's ever seen. Lewis regularly led with his helmet and crushed guys for over a decade (granted it was legal at the time). Just because the game has changed, Lewis has no right to pretend he would not do the exact same as Gronk.

These two videos show just a few of the dirty, helmet targeting hits that Lewis had throughout his long career.


Keep Gronk's name out of your mouth. The fact that he has to deal with defenders constantly holding him is maddening enough. He made a mistake and apologized. Oh and the fact that Tre'Davious White wants to injury Gronk in retaliation on their next meeting on Christmas Eve? So now Gronk is the only bad guy in the league.

What did Tre'Davious White text to our Ryan Clark about the Gronk hit?

And White even practiced on Wednesday in a limited fashion. So the "worst hit" Lewis has ever seen didn't even force the guy miss practice. Very interesting...

Lewis, despite the fact you have changed your image over the years, nobody can forget your checkered past. Maybe you should remember how insanely passionate you were on the field and understand what Gronk was feeling in the moment. Lets pump the breaks on all this anti-patriots propaganda and let the man serve his suspension and move on without bashing his character. We can save the bashing of character for Ray Lewis.

Follow me on twitter @jakescearbo if you liked my angry rant about Lewis! Also check out my website at jakescearbo.com to read more pieces by me!