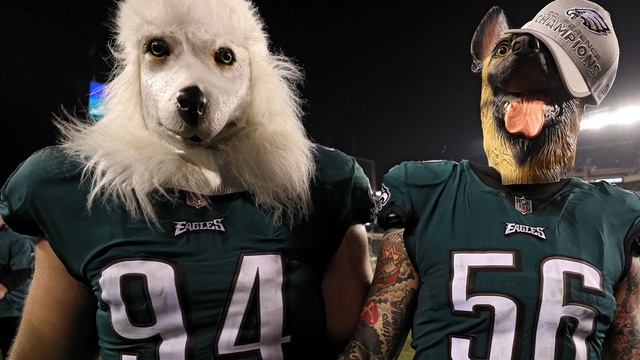 With two number 1 seeds facing off in the Super Bowl, you wouldn't think there would be too much of an underdog story. However, that's the storyline the Philadelphia Eagles have embraced all year and is one that Malcolm Jenkins believes will end with a Super Bowl victory.


"The Patriots have been in this game so many times that I think we all look at them as kind of the gold standard of this league. And so, in a season where we've been doubted all year, for me it's just right on par to be able to go against a team that has such a legacy as the Patriots," Jenkins said, via ESPN's Tim McManus. "But that's just part of the story. When we finish this out, and we come back Super Bowl champions, that will just be the exclamation point on this whole story."


Certainly no one would have expected the Eagles to be in the Super Bowl before the season, but that story changed throughout the year. Philadelphia rode MVP candidate quarterback, Carson Wentz, to dominate the top spot in the conference nearly the entire season. However, when Wentz went down for the year late in the season, many were counting the Nick Foles-led Eagles out again. The Eagles opponents were favored to in both of their playoff games, against the sixth-seeded Falcons and the second seed Minnesota Vikings.

However, the team is apparently feeling plenty confident. However, to get the storybook ending they will have to go against Tom Brady and a Patriots team that is appearing in their second straight Super Bowl and 8th overall with the Belichick/Brady tandem. For Jenkins part, he believes the Eagles match up well personnell-wise with Brady's Patriots, which is why he's feeling so confident.

The Eagles do boast a great defense, but the Patriots just defeated the No. 1 defense in the league in a comeback win against the Jaguars. Jenkins can be free to feel confident in his team pulling the upset, but it might not be wise to give Tom Brady and the Patriots any bulletin board material. This quarterback especially tends to use anything he can as extra motivation.