Given that Tom Brady is a sure Hall of Famer, one of these days, he’ll be hanging around a hospitality room at the Super Bowl hob-knobbing with fans. But until then, Patriots fans will have to settle for sharing a story or a drink with the likes of Emmitt Smith.

New England has played in three Super Bowls since 2011, has played in the post season nine consecutive times and 14 times since 2000 and, of course has won five Super Bowls this century (including three consecutive between 2001-04). This season, the Patriots could add to their championship hardware with yet another trip to the Super Bowl. Winners of the AFC East, New England begins its defense of Super Bowl LI Jan. 13 when it hosts an AFC divisional game.

For New England fans who don’t want to get stuck without entrée into the biggest sporting event of the year, NFLOnLocation.com, the official purveyor of Super Bowl LII tickets, has rolled out yet another specialty package. With the new “Hall of Fame” package, fans can get tickets to the game and access to a hospitality suite where they can rub elbows with the NFL’s leading rusher and two other Hall of Famers, John Randall and Dan Hampton. The deal starts at $6,299 and besides the above, includes a ticket to a Pre-Game Party where Grammy winner Kelly Clarkson will perform and a pre-game hospitality area with a menu developed by chef Andrew Zimmern of the Travel Channel hit “Bizarre Foods: Delicious Destinations.” 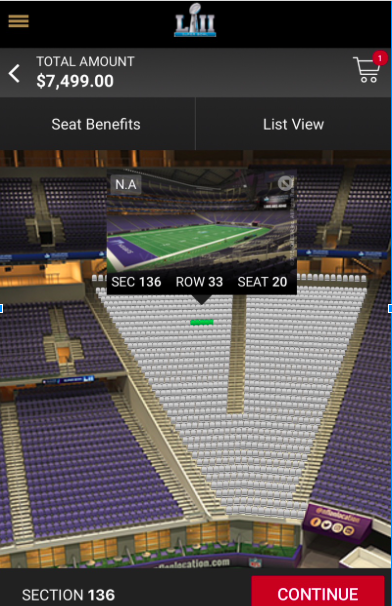 As if that’s not enough, the cost of the package very nearly mirrors the current average asking price for a ticket to the Super Bowl on the secondary market. According to data from TicketIQ.com, the average asking price as of Jan. 5 was $6,163, making Super Bowl LII the most expensive in history.
Given their success, the Patriots have long been the priciest ticket in the NFL. And Brady has set the standard as the best quarterback in the NFL. While there is always some argument about whether he’ll go down as the best in history, he’s definitely the best and most durable of his generation.
The Patriots are poised for another shot at the Super Bowl. New England, which finished with a 13-3 record, has home-field advantage through the playoffs.

Last year, Patriots fans visiting Houston for the Super Bowl got stuck with tickets where the cheapest ticket cost $6,000 on game day. Should the Patriots make it to the Super Bowl again, ticket prices will likely soar even more. According to TicketIQ.com, three of the top five most expensive games since 2010 included the New England Patriots, including the most expensive game, the 2015 matchup with the Seahawks, for which prices settled at $6,104. Forty-five days out, the average asking price for those same tickets was $3,359.
Besides the “Hall of Fame” package, Patriots fans who don’t want to miss out on the game in Minnesota can purchase a variety of packages from NFLOnLocation.com. Each package includes at least entree to the Pre-Game Party as well as a ticket to the game. The company gives fans the ability to select their own seats as well as add plenty of different options.

NFLOnLocation.com has five different packages still available, ranging in price from $6,299 (300-level seats plus the pre-game party) to $13,499 (field-level seats, pre-game party, post-game field access and other goodies).
The least expensive package available through NFLOnLocation.com is nearly the same price as a game ticket on the secondary market, for which the current average asking price is $6,163.
If that number holds, a ticket to this Super Bowl would be the highest since TicketIQ.com began tracking data in 2010. The current priciest ticket was also for a Patriots game — in 2015, when the final average asking price was $6,104 to see New England play Seattle in what turned out to be an epic matchup.

Getting a seat at Gillette Stadium for the playoffs will seem cheap compared to Super Bowl tickets. According to TicketIQ.com, the current average asking price for a ticket to see the Patriots host an AFC divisional game on Jan. 13 is $480. That is the highest price for a divisional game at Gillette Stadium since TicketIQ.com began tracking data in 2010. And it is the most expensive ticket for any of the four divisional games – currently tickets are available on the secondary market for $433 for the Eagles, $414 for the Vikings and $333 for the Steelers.
The most expensive ticket was last year’s Conference Championship against the Steelers, which clocked in at $758. Given the Patriots’ popularity and the likelihood of a repeat matchup, it’s likely the cost of this year’s Conference Championship will exceed that number. But if the Pats make it to the big game, whatever the cost of those conference championship tickets, it will feel like a bargain.