Jimmy Garoppolo says he was better than Tom Brady 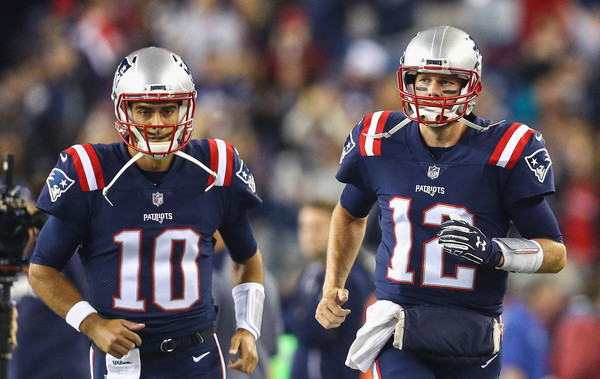 
Jimmy Garoppolo is in the spotlight today after the latest Monday morning quarterback featured a quote the from Garoppolo, claiming that there were times that he felt he was better than Tom Brady. Theres no hiding that there was a very competitive nature between the two. After practices, the two quarterbacks would play the "bucket game". The bucket game requires you to throw a ball into a bucket that has been placed in the corner of the end zone. Jimmy Garoppolo said, “There would be days where one of us would win and you wouldn’t talk to the other for a little while. We’d be fine the next day, but it was one of the best things for me. We would push each other and we got two Super Bowls out of it.

This is very interesting because we are talking about a quarterback who has seven career wins and is comparing himself to a five time Super Bowl Winner and arguably the greatest QB of all time. Not to mention, Jimmy Garoppolo has a short sample size, he averaged 312 passing yards per game, while also throwing seven touchdowns and five Interceptions, while having an undefeated record in games that he has started. Those numbers aren’t impressive enough for people to take this claim credibly. Maybe it'll work out for Garoppolo and people will look back on this and won't think there was anything wrong with what he said.

Lets not forget that Brady, who was unknown when he was drafted in 2000, once told Robert Kraft, made a claim that was insane at the time. In 2012 in an interview, “I still have the image of Tom Brady coming down the old Foxboro stadium steps with that pizza box under his arm, a skinny beanpole, and when he introduced himself to me and said ‘Hi Mr. Kraft,’ he was about to say who he was, but I said ‘I know who you are, you’re Tom Brady. You’re our sixth round draft choice,’” recalled Kraft. “And he looked me in the eye and said ‘I’m the best decision this organization has ever made.’ It looks like he could be right.”

Garoppolo surely has to prove himself in the upcoming season after he inked a five-year/$137.5 million contract. Its a large contract for someone who has only played so few games in the NFL.