Kenny Britt feels he is falling behind due to his injury 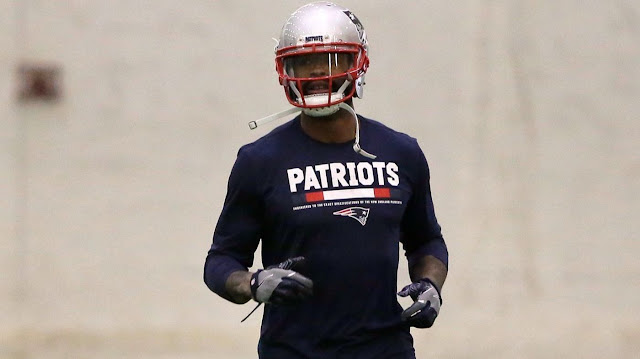 Patriots wide-receiver, Kenny Britt, suffered a hamstring injury on June 5th and has yet fully participate in a practice. Britt opened up training camp on the physically unable to play list. "Well, I expected to be out there," Britt said Sunday after a Patriots walkthrough, "but my hamstring told me something different."

After ten days of being on the PUP list, Britt was removed from the list but kept on a side practice field with the other injured players. "You never know with a hamstring. One day you'll feel good and then something's in the air and [it's] popping. Other days you might feel bad, and it might be the fastest time you've run out there," Britt said. "So it's really a feel thing day in and day out."

The Patriots have major decisions to make with the 53- man deadline approaching on September 1st and Britt's injury doesn't help him. Britt's injury certainly won't cost him his spot due to Julian Edelman's suspension and other than Chris Hogan there hasn't been anyone to prove themselves as a viable option.

Britt has made it very clear that he feels like he has fallen behind due to his injury."Definitely feel like I'm behind because I'm not out there with the guys getting the chemistry that I need with the quarterbacks and just with everyone on the same page of what we do." Britt said. Obviously the sooner Britt can return, the better it will be for both him and the Pats.

Britt explained: "That's one thing we don't have during the season is we can't spend too much time on all the mistakes we have. During the season, you're just moving forward," Britt said. "Here, OTAs, you have time to correct the things that you do on the field, off the field and stuff like that and come back the next day."

Britt says he has been feeling better recently. He has been getting new tasks everyday and has been doing what is 'manageable.'

"I miss every bit of it, to tell you the truth. Best place is out there on the field for me. That's my peace, and that's where I love to be," Britt said. "And of course I want to be out there with the guys."