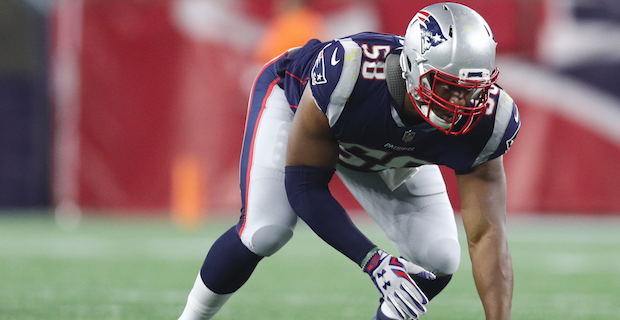 Although considered to be a mid-round pick in the 2017 NFL Draft, defensive end Keionta Davis ended up being an undrafted free agent for four months until eventually getting picked up by New England. Unfortunately for Davis, his playing time was significantly reduced after medical concerns about reports of a bulging disc in his neck. Davis was ultimately placed on the non-football injury list, ending his very short rookie campaign.

After spending all of the 2017 season watching from home, Davis is really making a strong case for a spot on the roster this season. While the top roster spots in the defensive end position appear to be locked up, Davis can still play a role in an emergency depth position either on the 53 man roster or more likely, the practice squad.

Davis' work ethic and time at practice has not gone unnoticed by coaches and he played a team high 54 defensive snaps during last weeks preseason game against the Eagles. Davis made the best of his extended playing time by tallying 1.5 sacks and three more pressures on the quarterback.

Bill Belichick has taken notice of Davis' efforts and has so far been impressed by what he has seen.

"He still has a long way to go," Belichick said in an interview this past friday. "He still has a lot of things he needs to improve on and refine and react quicker to and so forth, but that comes from not having actively played football for a year, or a little more than a year. Hopefully those things will come back to him and his reactions and all will continue to improve. He's done a good job. He's in good condition. He's worked hard. I like what he's been doing."

Davis still is a longshot to make the 53 man roster, but if he continues to improve at the level he as achieved thus far, the future should remain bright for the young and talented defensive end.