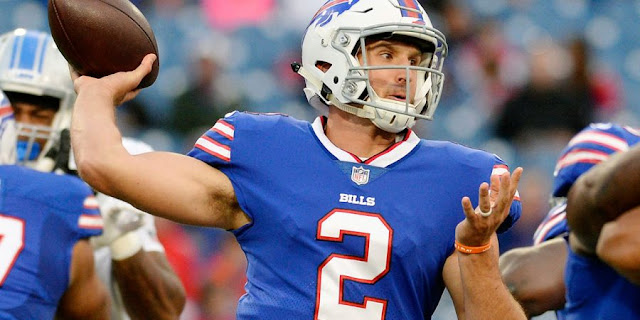 If there is one thing that you can write in stone before the start of the 2018 NFL season, its Tom Brady. The forty-one year old quarterback is starting his seventeenth season and has shown no signs of slowing down, unless you are Rob Parker of Fox Sports 1, of course, then Brady is certain to have a colossal meltdown this season.

The Bills named second year, Pittsburgh graduate, Nathan Peterman as their starter for Monday nights game against the Ravens. Peterman is a well established quarterback in the NFL... actually I apologize, I couldn't even finish that sentence, thats how bad he was. In his rookie season, he played in four games, he had one win and three losses. Peterman also only threw for 252 yards, tallying two touchdowns and five interception. Peterman finished the season withe a total 38.4 passer rating, yikes.

The Jets have a little bit more hope though. Sam Darnold, the third overall pick in the draft has made a name for himself through his years at the University of Southern California. Darnold was a proven winner in college but by no means does it translate to the NFL. Ask Vince Young, former USC quarterback Matt Leinart, and former New York Jet, Mark Sanchez. Im not saying that Sam Darnold is gonna be an all time bust like the names listed above but he will certainly need some time to mature and become acquainted to the different game, that is the NFL.

For the record Rob Parker said that the Jets are gonna win the AFC East this year which is incredibly idiotic but ill save the smearing of Rob Parkers name for after the season. Really though, A rookie quarterback who has never played in a meaningful NFL game is gonna win the division in his rookie year? Come on.