Say all you want about him, Dont'a Hightower couldn't care less about critics 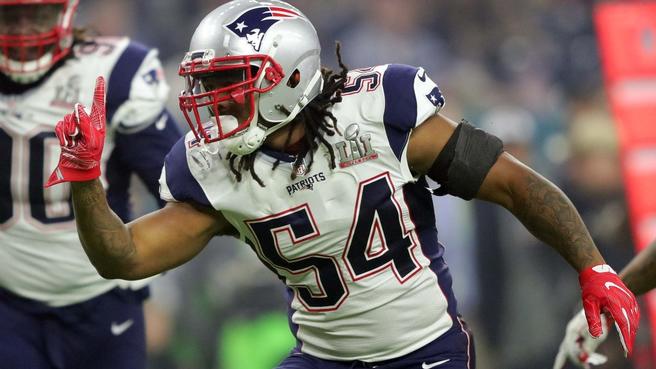 Back in Detroit when the sky was falling, people realized that rookie Ja’Whaun Bentley was wearing the "green dot" on the back of his helmet. When a player wears a green dot on his helmet, it means that he is the one communicating the plays from the sideline to the guys on the field.

Dont'a Hightower, who played mostly off the edge in addition to linebacker in the first two games is usually the on-field communicator, but appeared to have some struggles early on. After Bentley fell to IR, Hightower resumed his leadership on the field and solely played in the linebacker spot. It is also safe to say that this move might've had something to do with the Pats defense holding the 3-0 Dolphins to just seven points.

When asked about his critics off the field, he didn't seem to bothered. “It’s cool,” Hightower said. “I’m coming out every week dedicated and devoted to what I have to do to for my team. All the outside stuff don’t really matter to me whether it’s ESPN or NBC or wherever else. Anybody can say whatever they want to as long as my teammates know I’m giving 110 percent that’s all that matters to me.”

Hightower also went on to say: “At the end of the day, I’m not googling things but I can tell by the questions like, ‘When are we going to see the Hightower from the Super Bowl?’ “ he explained. “It doesn’t bother me. But I don’t need people bashing me and then next game come back and say, ‘That’s more like it.’ I’m going to do what I can and that should never be questioned.”

With comments like this, I think it proves that the players understand when things are going wrong and are actively working to fix them. It is a long season and with all these new faces on defense, it's going to take leaders like Hightower to make sure everyone does their assigned tasks and to make sure the defense continues to play at a high level.