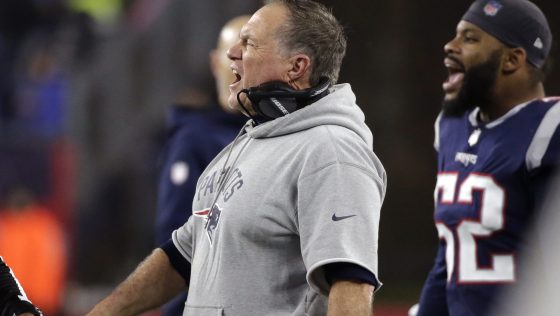 During Sunday's Game, wide receiver, Adam Thielen and Bill Belichick had a heated exchange of words. After a Vikings first down, Pats cornerback, Patrick Chung fell to the ground from an injury, giving the Patriots more time to decide if they wanted to challenge the spot of the ball.

Thielen was heard saying "that's bullcrap" through one of the field mics. Thielen went on to say that he felt that the timing of the injury was interesting.

"I just thought the play was cheap," Thielen said. "I wasn't directing it toward him. I just thought the play was cheap, but like I said, I let the emotions get the best of me because it's a smart football play if you are in that situation. Why not? It's not cheating because there's no rule against it from a guy going down. I don't know if he was hurt or not. He might have been hurt. That's fine. It is what it is. But like I said, just interesting timing for a guy to go down when it's a close play."

Bill Belichick yelled, what appeared to be, "Shut the f*ck up" and "sit the f*ck down" at Thielen during their exchange. In an interview with WEEI, Tom Brady spoke about his exchanges with Belichick in the past.

“I’ve been on the other end of that a few times in my career,” Brady said on WEEI. “Pretty funny. … It’s competitive out there. It’s very feisty and everyone’s emotions are on their sleeves. You say something and there is just an emotional reaction. That was pretty funny.”

In his postgame press conference, Thielen talked more in depth about emotions on the field.

"No offense taken," Thielen said. "It's football. There's emotions. He can think what he wants to think about me. It doesn't really change how I'm going to go play the game. He can hate me all he wants. I'm still going to be the same person I am. I'm going to try to go out and do my best, and I'm going to try and compete every play."

Other Pats players also chimed in about Belichick sticking up for his team.

This has to be the greatest thing I've ever seen, honestly. How often do you see a coach absolutely embarrass another teams player. For the rest of his life, Thielen will be known as that one guy that got told to "shut the f*ck up" and to "sit the f*ck down" by arguably the greatest coach of all time.