J.C Jackson stepped up big-time in win over Minnesota 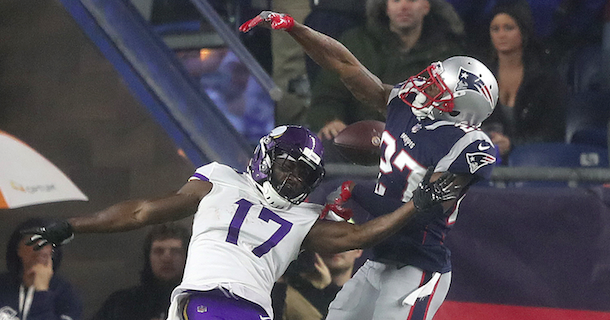 Heading into the hyped-up matchup between the Pats and Vikings, I bet you wouldn't believe me if I told you that J.C Jackson would be the difference maker in that win. Quite honestly, you wouldn't even be at fault for making that assumption. Jackson has been bouncing around the depth chart of the secondary these past few weeks, but was assigned the role of outside corner this weekend, opposite of Stephon Gilmore.

The change came this week, with Jason McCourty taking over the slot position, usually held by Jonathan Jones and have Jackson take over on the outside. As you would expect, Kirk Cousins went after the undrafted rookie almost right away. Jackson played 54 of the 61 possible snaps and was targeted 7 times, in which he allowed 4 receptions for 23 yards and tipped the ball in the endzone which allowed Duron Harmon to collect the interception.

"He kept trying me," Jackson said of Kirk Cousins. "I made him respect me. He kept trying me. I like that though. That just gives me an opportunity to make a play so I love it. I love when quarterbacks try to throw my way."

The defense was able to hold the Vikings offense to only 10 points, which allowed the Patriots to play the game on their terms and continue to be dominant when playing at home.

As long as the Patriots continue to improve in the way in which they have, they really have a good shot in winning out in the regular season and making a good push for their playoff standings.