Former Charger and obviously biased Shawne Merriman believes L.A. is a lock to beat the Patriots 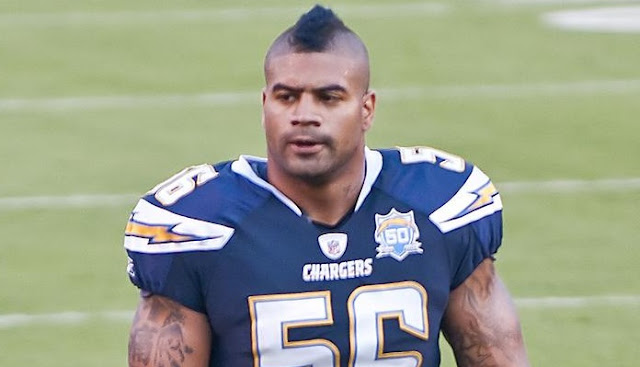 Wow truly groundbreaking news...A former Chargers/Bills player thinks that the Patriots are a lock to lose this week? I would've never guessed that. Could Merriman's bias be related to the fact, that he isn't over, the Patriots mocking his dance in 2006? Maybe its because Merriman's Chargers were eliminated, twice, by the Patriots.

On Monday's episode of “The Herd” on FOX Sports 1, Shawne Merriman presented his case to why the Chargers are a lock to beat the Patriots, in Foxboro.

"They’re a lock for me this week,” Merriman said. “The Patriots — yeah, you have Bill Belichick, you have Tom Brady there, but they’re not the same team they were in the past. They’re just not. They don’t bring that kind of stamp to the field anymore. I know they’ve been in the playoffs, they have the experience. But this Chargers team right now, they’re the most resilient team in football. They’ve been through so much. Injuries and the move and people not really paying attention to them and they just use all of it as fuel. Going out there is going to be no different. Them winning on the road, it hasn’t been a problem this year. They’ll go right into Foxboro, it will be competitive, it will be a good game. In the past, the Patriots have always found ways to win. Not this time, I don’t think that’s the case.”

The Chargers are a very good team, don't get me wrong. They have a solid offense led by Phillip Rivers, Melvin Gordon, and Keenan Allen. Their defense is very good as well. However, I don't believe that they will go into Foxboro and win and they certainly aren't a "lock." The Patriots are 8-0 at home this year, and that has to be taken into consideration. Yes the Chargers are undefeated in away games, but the playoffs are different.