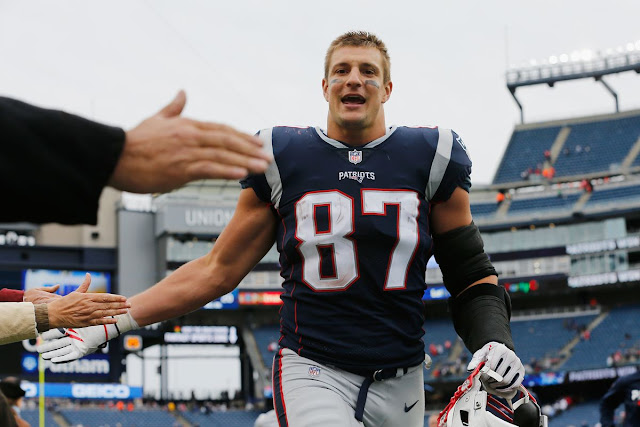 It's clear to most fans of the NFL that Rob Gronkowski isn't playing like he once was. It doesn't take a genius to see that. Gronk hasn't been the vertical and scoring threat that he once was. This doesn't mean that Gronk doesn't contribute though. Gronk's contributions to this team might be more important than ever.

His blocking abilities to push the run game has been nothing short of incredible. Gronk has been the biggest factor in the Patriots running schemes, his abilities to clear holes and set the edges for outside running plays has ben unparalleled. Gronk also came up multiple times in the game with big catches. Gronk had six catches for 79 yards, with his biggest catch during overtime. Brady threw to Gronk on a 3rd and 10 for a 15 yard reception.

Gronk spoke about his contributions during crucial moments.

“That’s what practice is all about. That’s what knowing that when it comes to those situations, you can put the ball up,” Gronkowski said. “I’ve got to go and make the play. It’s crunch time, you have to make the play or you’re done, you’re out of the playoffs. “I’ve just been fighting all year long so when situations come like this I’m ready to go and ready to make some plays,” he said.

“He was playing his butt off,” Brady said. “He has done that all year. He is out there whatever we ask him to do, he does with an enthusiasm about him, He is an incredible teammate and person. … I’m just so happy to have been able to play with him for as long as we have.”