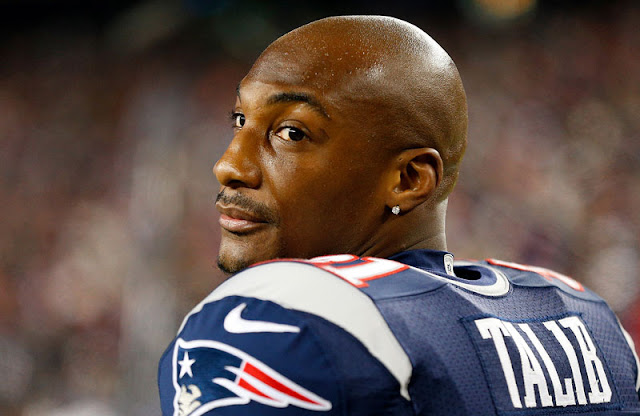 During Opening Night of the Super Bowl, Rams quarterback Jared Goff and cornerback Aqib Talib sat down in a four person interview with Patriots quarterback Tom Brady and safety Devin McCourty. During the interview Talib was asked about practicing with Brady everyday. Talib went on a small rant about how he can brag about catching a pass from Brady and how he's the "GOAT." After the interaction with Brady and Talib, a story about Bill Belichick wanting to try Talib out at wide receiver created a small reminiscing period between the three former teammates.

This was incredibly fun to watch as a Patriots fan. I loved the time that Talib spent in New England and was upset when he left the team. After I watched this video multiple times, one thing struck me as hilarious was the awkward silence from Jared Goff. What could Goff possibly say as his current cornerback appeared to miss his time in New England. You can see Brady, Talib and McCourty laughing and having a good time while Goff just forced a few smiles and sits off quietly to the side. The funny thing is Goff was probably about 18/19 years old, possibly going to his next high school class, when this all took place. Below enjoy this screen shot of Goff from this interesting interaction.