Odell Beckham Jr. wants to turn the Browns into the Patriots 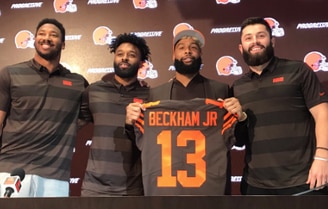 The Browns are slowly becoming the main focus of the NFL. Will they win the division? Could they win a playoff game? Everyone seems to have an opinion on the upcoming Browns season. OBJ isn't really focused on the media but has high expectations for his new team this year. In a recent story, Monday, Beckham told GQ that he is determined to help turn the Browns "into the new Patriots." Arguably the greatest football dynasty in the history of the NFL. A team that has won six super bowls in the last two decades.

Beckham also talked about his future plans for the Browns.

"I plan on being there for the next five years," Beckham told the outlet, "and trying to bring as many championships there as possible."

OBJ has made himself into one of the top three receivers in recent years. As long as he can stay healthy. Beckham told GQ that he is "probably the happiest I’ve ever been in my life" since he was traded to the Browns two months ago. Yeah, that's not a hard one to figure out. How can anyone possibly be happy with an old and mediocre quarterback like Eli Manning or playing for an organization that doesn't value its star players and the next best weapon is Sterling Shepard, before they had Saquon Barkley.

Odell Beckham also had high praise for his young quarterback.

Going back to the whole New England Patriots thing, I think it's a nice goal to have. Every team should want to be the Patriots. The Gold Standard of the NFL. As much as I like Odell, I think its gonna be pretty hard for him and his teammates though. Think of how many times people have wanted to "be like the Patriots" but yet it never works out for them. Its hard to implement a system that puts the team first and you act as if the coach (Belichick) is practically god and knows everything. Its tough to never have off the field issues or have serious issues within the locker room. It's tough to have a core of the team to stick together for multiple seasons in todays modern free agency nature. Most importantly it's tough to win six Super Bowls in less than two decades.