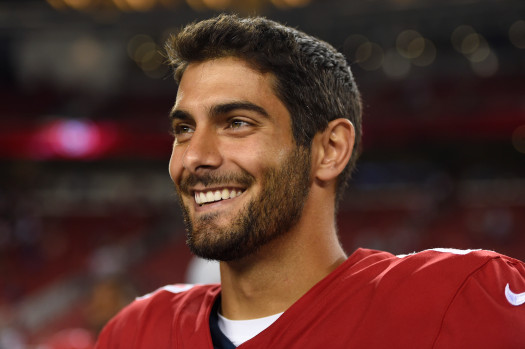 Although his first season as a franchise starter was cut short, former Patriot Jimmy Garoppolo learned a great deal about the ins and outs of the league from backing up Tom Brady.

In a recent interview with "The Ringer", Jimmy G broke down some of the lessons he learned from just watching Brady.

“The preparation as a whole was tremendous just to see it, to be in the same room as it, to learn from it. To be a rookie and see that, it was invaluable. I can barely put it into words.”

The NFL can move very quickly for rookies, so learning to slow everything down is huge for the young guys, and learning from the best to ever do it certainly can't hurt.

Fans have yet to see what Garoppolo is fully capable of, as he got hurt just a game and a half into starting during Brady's 4-game suspension in 2016 with New England, and only has had 8 starts with San Francisco. 5 of those came after the mid-season trade in 2017, and he then suffered a torn ACL only 3 games into last year.

Prepare for more Brady/Garoppolo comparisons once he gets back under center next season, as we hope to get a real taste of Garoppolo as a starter.