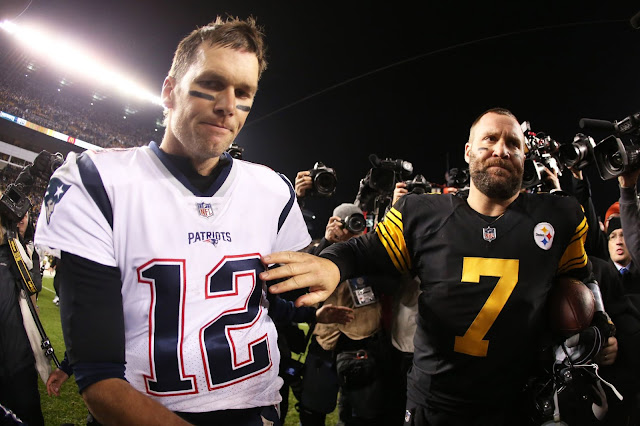 The Patriots kick off their home opener against the Steelers tonight and will also be raising their sixth Super Bowl banner. I was pretty angry whenever I heard that the Pats didn't get the NFL season opener on Thursday night, but the more I think about it, I can't think of a better way. I love the idea of the Patriots raising their sixth banner on the team that has spent the last decade uttering the phrase "well at least we have six Super Bowls" in an attempt to make excuses for their mediocre franchise.

I mean think about it, shouldn't we really be talking about one of the greatest sports rivalries of all time? Bill Belichick and Tom Brady vs the Killer B's. An all time great rivalry, yet the Steelers just couldn't beat the Pats. Tom Brady is a career 11-3 versus the Steelers. Now with Le'veon Bell signing with the Jets and Antonio Brown playing for the Raide...Patriots now? There is a new Steelers ERA upon us.

The Steelers are now looking for guys like JuJu Smith-Schuster, James Conner, James Washington, Vance McDonald, and Benny Snell Jr to carry the Steelers Offense. Of Course they have Big Ben Roethlisberger at quarterback.

The Patriots are looking to defend their current Super Bowl after bringing in a good amount of new faces. Adding Antonio Brown, adding Michael Bennett, adding N'keal Harry, and having Josh Gordon reinstated, yet losing Rob Gronkowski will be an interesting event of actions to see play out. Also having James White, Sony Michele, and Edelman return will be a nice balance. They kick off at 8:20 p.m. EST, with the pregame Super Bowl festivities kicking off before.

I think there will be four points to look forward to. The first one is having the Super Bowl banner revealed. The second point is the moment they show Antonio Brown on the big screen. The third is Josh Gordon's first touchdown of the season and lastly watching the Pats win the game.