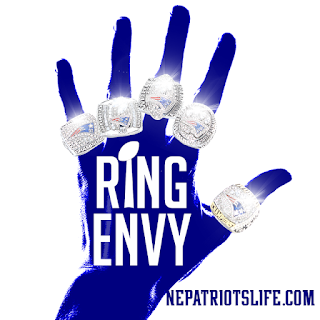 Yeah, I know, I gotta get an updated version of this. But anyway, Ring Envy is back! Who better for the Patriots to drop their sixth Super Bowl banner on than the Pittsburgh Steelers, the only other NFL team with six Lombardi's? As is tradition, Steelers fans began the night with blind optimism, which turned into endless bashing of Mike Tomlin. Hopefully they keep him around forever.

I’m nervous but not nervous in the sense where I can’t function lol. More anxious to see where and how we improved

F IT let’s do this. I was going to watch this out of principle but F IT here we go black and gold. Blow these cheaters out!!!!!!!!

No happy ending for Kraft tonight. Unless TB lends a hand

You know... watching that ceremony, I REALLY want to see the Steelers return the favor next year and raise #7 while NE watches.

These losers have no one, Edelman is. Whiney small ass punk, I don’t even know anyone on their D, and F Brady tired of seeing his face. This is where we surprise everyone. I’m actually super pumped now.

This team better be ready!

Let’s get our first 3 and out

Now hear this...anything less than a Tom Shady career ending injury will be a complete failure. That is all.

Hell yeah our D looks great and we stopping that run. Brady looks scared and off rythem

6 runs and 1 pass on that possession. AB isn’t going to like that mix. Better open up the playbook by next week.

Already cheating by brady getting play call into helmet after clock and defense is set to motion rb from slot.

If we jump up 7-0, Brady will start throwing every down, you watch.

Every other team in the league that is PI.

Mugged him the whole way because he was burnt, Collinsworth ..." Clean play"

So much wrong with this game already! No PI. Pats with the illegal Pick?

two picks in a row, it's by design, we don't call them the cheats for nothing

Watching this team play the Patriots is so frustrating. The run looks like it's nothing every time yet they gain like six yards per carry.

So much for the Steelers controlling things up front. It isn't happening so far.

2 plays and 15 on the ground. Then a pitch out for a first down. Terrible defense.

As usual, the Patriots are 10 steps ahead of the Steelers.

I sure hope the Steelers drew up some dirty plays too

Dammit scored on by a drug addict lowlife

First and twenty, and they end up scoring on that drive.

Steelers are STILL Brady's *****. What a pathetic exhibition of "defense."

It's almost as if we didn't expect them to do what they ALWAYS do.

When Tom Brady says "Kill, Kill," why doesn't someone oblige him?

Brady hasn’t even been touched yet

I see how good the Pats are, but this team just crumbles against the Patriots 90% of the time. Let's hope the rest of the game makes me look stupid.

The Steelers think they have something playing Conner and Samuels together, but they really don't.

WOW Pats OL must be full of Hall of Famers! No flags on them!

Goodness, I know it's early but this is unbelievably bad play calling.

This team mentally spots NE 14 points before the game even starts every time they play them.

Belicheat with a convenience TO. He'll be back in 2 plays Guaranteed.

No Gronk for the defense. No Vannoy for the offense. We better figure it out.

Tomlin acknowledges and accepts that penalty, it's a part of the game

TOMLIN is an embarrassment to the coaching profession

what an ill prepared jerk off of a team. **** Mike Tomlin and all those who support him. Clown coach, overrated and useless.

Wow! Great return created by a hod on the Gunner right at the point of attack...not called!

Gonna be a blowout

Without AB, the Patriots are about as average as it gets offensively. I just don't understand why this team is so mentally weak against these guys.

I see Patty Cake DuPree hasn't changed...2nd string LT, who is dinged up.... Dominate me!

If there's one thing AB did get right he knew he'd never win a championship here.

One quarter and I've seen enough. Lifeless. They are beat before they even get on the plane. It is pretty disgusting. I'm taking my toys and going home early.

Flags don’t matter. Tomlin’s not even in the same state as Bill let alone even having a game plan to compete. Same stuff every year. At least it’s the pats and there not losing to the Dolphins in game 1.

You know how they usually play a song when the team comes out of the locker room to start the game? The Steelers should have to play "No Vaseline" by Ice Cube every time they play the Patriots.

Let’s put a guy that started in the AFL on the Super Bowl mvp that’s smart.

Brady looks like ass, I don’t think AB going to help them

Switz looks slow plus I farted and he fell

Patrick Chung got there so fast from all the coke still in his system.

I just saw an ad for the TB12 program. Brady's even invaded this forum!

Maybe AB was right, Tomlin will never come anywhere close to winning anything.

One splash play from any Steeler could spark this lifeless team. They look like they’re still doing a walkthrough right now

I'm in shock. The officials actually threw a flag on the Patriots.

Come on guys! Cheats D looks horrible we can get them

3rd and 1 and we get cute again. Once again not under center. Line up under center and smash it in there for **** sakes. I don't really care if Ben doesn't like being under center or not, suck it up

I'm out. These assholes get paid millions to not show up. Not going to be dead at work tomorrow from watching their lazy undisciplined play.

wow pats first 8 games and only one opponent had a winning record. So 8-0 start for them?

Another cakewalk to the Super Bowl. Seriously don't BB and TB ever get bored with this?

Edelman again...do they not think they need to cover him?

Collinsworth is the worst! “It is not often these coaches let the other teams star player beat them”. Really??? Doesn’t Brady shred us every time we play him!

death, Taxes, Getting rammed in gillete

Brady can afford to diet all season. He feasts on the Steelers at least once a year

great incomplete passes to save the pats more time to score

Looks like we all need to become Chiefs fans. Otherwise #7 is gonna happen for NE

Brown and Bell are laughing their a$$ off.

It’s official- we wasted an entire decade of generational offensive talent with no titles to show for it. THIS is why Tomlin is a complete and total clown who deserved to be fired years ago.

Steelers suck Wang and Chung broke it up.

Keep in mind they are doing this without their top weapon. If AB plays the whole year this league is so screwed.

At least have enough decency to hit Brady low, TJ. Yeah, I’m that terrible of a person.

They ain’t going 19 and 0. They may win this one but they look awful on D and Brady looks his age. We literally suck as bad as Miami making the ravens look like champs

Very Disappointing! These guys don't have their heads in this game. It seems every time they play in that stadium they loose their focus. They play right into their hands, no adjustments until after halftime is not good. Where is their f**k u and your fake a** titles attitude, where's wreck it Ralph, where's juju kid, where's Blitzburg? What happened to shut out the noise?

Steelers should fumble this kickoff, you know, to,stay consistent. The standard is standard.

For the love of all that is holy, please quit throwing to Moncrief. Dude is fundamentally doggy poo.

Go for it on 4th at this point. Tomlin sucks.

I truly don’t understand why we went for three. On the damn one yard line.

Only the cheats can run pick plays

Getting blown out and you want to call the pick on the Steelers when the pats did it all game!?

EDMUNDS AGAIN!!!!!! floating duck and he doesnt look for the ball!!!!

I'm surprised Brady got sacked...your whole oline is allowed to blatantly hold and you still get sacked lol

I’m seriously starting to think the NFL is rigged. If Pittsburgh’s front office is too ignorant to fix these clear decencies, then there’s got to be something stopping it from happening.

You know, I love that stupid comment by Collinsworth.....You've got to admit, this team doesn't give up..... What the hell does that mean? They're not forfeiting like so many OTHER teams do???? They're trying not to spike themselves on every play????

Jon Jones is a great player, gtfo of here collinsworth I’ve never even heard of his sorry azz

Why did I look forward to having testicles stomped on.

Hey isiah Wynn here is my motivational Monday for you... go f urself

Pats have a 21 year old dbacks coach that is better than our coaches :facepalm:

Maybe the worst Steeler loss I ever watched.

Now this ***** Brady talking about how bad they played and well play better. I just can’t take this anymore I’m out for the season. All this wait for this trash.