X's and O's: Patriots at Jets 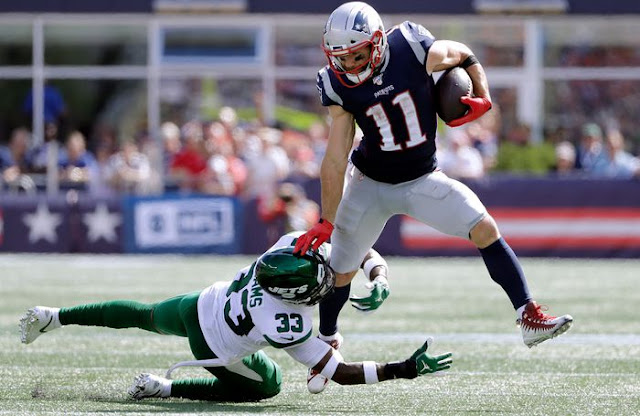 It's week seven and the Patriots are now 6-0. The Patriots also haven't played in 11 days and I think that I am losing my mind. I really hope the NFL never does that to us again, seriously two Sundays in a row that we didn't get to watch Patriots football. In the Patriots last matchup they beat the Giants, 35-14, while the Jets also pulled off a surprising victory against the Cowboys, 24-22, in Sam Darnold return.

The Jets play a man to man scheme, therefore the Patriots will want to use their weapons accordingly. Since the Jets are playing man coverage the Pats will want to find their mismatches. They need to find running backs on linebackers, Edelman and Dorsett, if he plays, on Safeties. The Patriots could line up with James White in the backfield and then have Edelman and Dorsett lined up in formation. Dorsett could run a vertical pattern, clearing the linebacker, Jakobi Meyers could run in the hole that Dorsett created, Edelman could run an out route. With Gordon being out and the pats having two tight ends out, it makes me wonder, what the focus of the offense will be. I could see the Pats using Sony Michele a decent amount to be honest.

The Jets offense looked a lot better last week against the Cowboys, now that Sam Darnold is back. It allows them to use Le'veon Bell in a different way rather than having him try to carry the entire offense. I will say though, I don't want to say that the Jets are back to being a completely functioning offense yet because it was only one game. The Patriots will really be a good test for them though. The Patriots' defense is a top two defense in the NFL in total yards allowed, passing yards allowed, rushing yards allowed and they lead the league in interceptions.