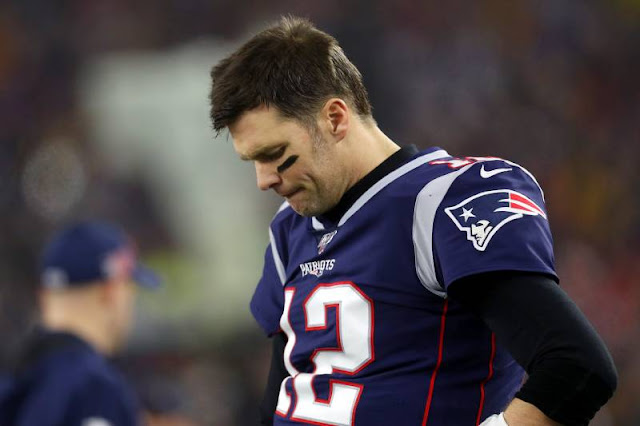 Well, the day has come. Tom Brady has decided to leave the Patriots. Disappointed doesn't even feel close to describing the emotion of most Pats fans. I woke up this morning to a brigade of annoying friends/fans who think that after the twenty years of the Patriots reign, thinking they have somehow won the lottery of life. That the Patriots are finished and they're going to be the new Browns. It was devastating. Knowing that I will never see my favorite player, playing for my favorite team in person is the worst part. My parents moved to Philadelphia in February and since they moved, the only thing that we have been talking about since is going up to Foxboro to see the Pats. That hasn't changed but it certainly won't be the same.

I've been writing about Tom Brady's free agency since the Patriots lost to the Titans. I've been deflecting the idea of him playing for another team but now it's real. Now the Patriots have to search for a new quarterback. It makes me sick. This was supposed to be a story-book ending. It was supposed to have Brady winning another Super Bowl and riding off on a majestic white horse into the sunset. Being the most beloved sports player in any town in the history of sports. I'm not saying Brady doesn't deserve those things. He won six Super Bowls for the pats. He has made the last 20 years special for so many people. Waking up on Sunday wasn't just another day of the week. It was a day that felt special. You woke up and immediately thought about the Pats. It was a day where people could escape whatever was going on in their lives to watch the Patriots dominate whoever they had lined up across from them. As I said, that can still be a reality but I am certainly a pessimist at heart and this feels like a setback. It feels like once we get to September, football is going to feel a little different. Knowing that Brady won't be on the Pats is crushing. I don't want that day to come.

Who could possibly be the replacement of the Pats? For starters, the Pats have Jarrett Stidham on their roster. There have been rumors of Andy Dalton being the next guy. Please don't do that. Cam Newton is currently looking for a team, especially after the Panthers signed Teddy Bridgewater. There are some quarterbacks in the draft that they could get but I don't think that's going to happen either. I will say, If the Pats wanna end my sadness, please give me Julian Edelman as the quarterback. Please God end the city of Boston's terrible offseason nightmare.

I will disclaim this entire post with the fact that I am only 20 years old and haven't experienced a season without Brady on the roster. Please, please, please older fans reach out to me in this time of grief and suffering. I desperately need it. I feel like the earth has stopped spinning and I don't know what to do. All in all, Thank you Tom Brady. You are apart of the reason that I fell in love with sports. You won Six Super Bowls and no other quarterback can say that. You have been the face of the greatest dynasty in the history of sports.You will be FOREVER A PATRIOT.