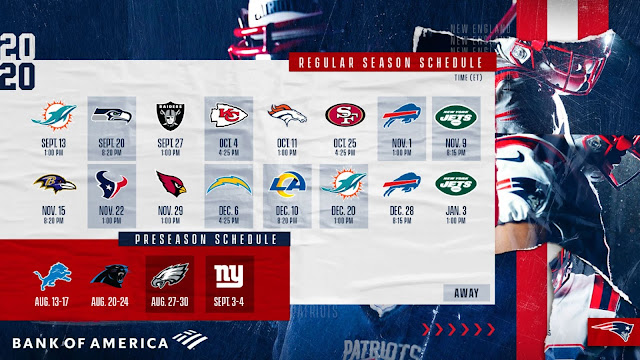 The Patriots released their schedule yesterday. Schedule release day is one of the most interesting days of the year. Everyone takes time out of their day, goes through each game, and counts on their fingers their team's record. Including me. I have absolutely ZERO idea what the Patriots record will be this but I'll certainly give you a bunch of ridiculous reasons why they'll beat that one team in early October. One nice thing about the Patriots schedule is that they still have a bunch of primetime games.

According to NFL.com, the Patriots have one of the toughest schedule in the NFL. The Patriots play seven playoff teams from the 2019 season, including road trips to Seattle in week two and Kansas City in week four. The Patriots are also hosting the Broncos, Ravens, and 49ers.

After looking at the Patriots schedule, I'm nervous. Im not expecting the Patriots to win the Super Bowl, that would be pretty naive of me. With the defensive departures and practically having a rookie quarterback, I would love to see this team put together a bunch of good games. I really don't care what their record is this year. If they go 9-7, but Stidham proves he's the future and N'Keal Harry, Sanu, and Edelman have a good year that's okay with me. So now the fun part. Looking at the schedule, I think the Pat Patriots have a legitimate chance at going 9-7 or 10-6. This year will be a fun to watch. This is the future of viewing the Patriots.