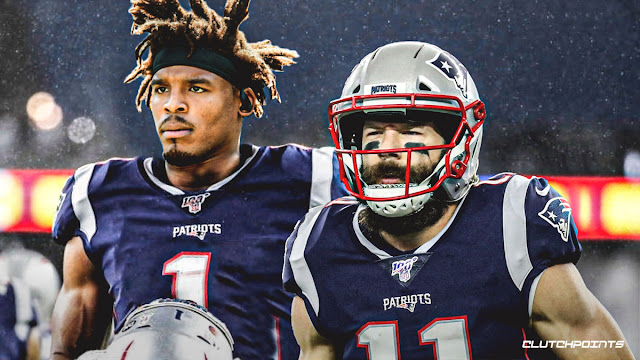 "Obviously we played a lot of football together and I love him to death, but the train keeps moving, as it will when I'm not playing here," Edelman said of Brady in his first interview with reporters since January. Obviously it was a little different scenario, but you got to move on and understand it's the business. You have to worry about the people we have here, and try to prepare ourselves the best we can."

Edelman also went on to praise Cam; while talking about his work ethic.

"When you first meet him, just his stature. He's large -- put together well," Edelman said. "He has a great energy about himself. I was really impressed with his work ethic and mindset."

Cam Newton brings in a lot of uncertainty. Not in a bad way either. Cam Newton hasn't played a full season since 2017. If Cam can stay healthy, I think that he can have a season like he did when he won the MVP. In 2015, Cam Newton had a 55.4% completion percentage, with a 78.1% completion percentage from 3-10 yards. The Patriots will thrive and can be successful this year if the Patriots can tap into that skill that Newton showed in 2015. I really believe that in some ways cam Newton can provide a type of variety to the Patriots offense that we haven't seen before. This all comes down to Cam's skill. He may have it, he may not. Im very excited to see how this season works out.