Patriots Agree to Terms With Running Back Lamar Miller 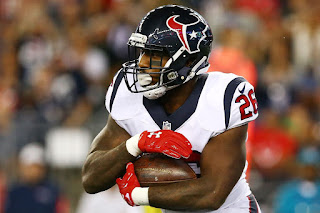 The New England Patriots have agreed to a one year deal with free agent running back Lamar Miller.
Miller spent last season on the IR with a torn ACL. Prior to that, he spent 3 consecutive seasons with the Houston Texans and has always proved to be a valuable weapon in the run and passing game.
Miller joins the Patriots and becomes the fifth running back on the roster now, and would have been sixth if not for the opt out from Brandon Bolden.
The Patriots running back depth chart is always an enigma, with players shuffling around and getting used a random amount each game. However, with the inconsistency from top back Sony Michel last season, plus a recovery from foot surgery this offseason, I believe there's a solid chance Miller could come in and win a starting job.
The Patriots were left with $70M in cap space after all of their opt outs, second most in the league. Bringing in a fifth option at an already deep position wasn't something I was too keen on using that money for, but I still believe it could prove to be useful. Now I am still waiting for them to go out and make a big splash for a free agent rusher like Clowney or Everson Griffen, a position we desperately need help at.
Twitter and Instagram @NickRufo21