Cam Not Worried About Injuries When Being Used as a Runner 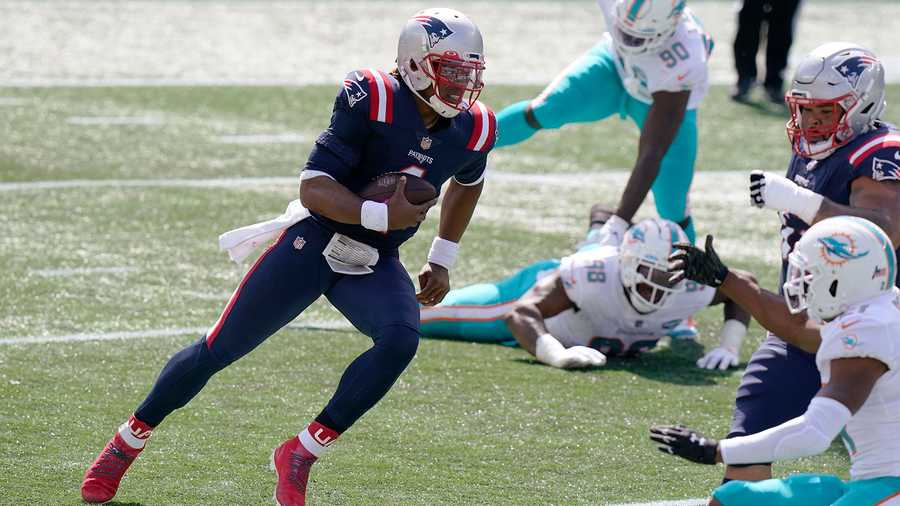 (AP Photo/Steven Senne)
In his season debut with the New England Patriots, Quarterback Cam Newton led the Pats to a 21-11 win over the Miami Dolphins, while leading the team in rushing with 15 carries and 75 yards with a pair of touchdowns on the ground. With a running style quarterback, the question always looms “What if he gets hurt?”
On WEEI’s “The Greg Hill Show” Newton said, “That's just been me. Every year, a new discussion comes up about 'It's not smart to run. It's not smart to do this. It's not smart to do that.' But at the end of the day, I just feel as if whatever necessary way you have to go about winning a football game, that's what you have to do.”
The question of “What if Cam gets hurt?” does carry some weight in my mind. We’ve seen some great running quarterbacks such as Robert Griffin III and Cam Newton himself go down from running the ball and receiving big hits. When Newton was in Carolina, you saw him take off and not go down until he was brought down. Sliding just didn’t seem to be an option for Newton as a Panther. He was also on the brunt end of some late hit no calls, most likely due to his larger size.
On Sunday, Newton appeared to be a new style of runner. Not in the sense that he was running less or there were less designed run calls, but in the sense that he knew when to give up and go down.  In a few instances on Sunday you could see where that approach to that side of the game had changed. When he got those first downs he’d slide after them, whereas old Cam may have kept going looking for that slim possibility of a big play. Or if he was caught for a sack he’d go down instead of shaking it off and taking the possibility of a big hit.
One major example of this was on his second touchdown at the beginning of the third quarter, Newton ran out on a QB sweep to the right. He got to the goal line and instead of committing one of Belichick’s cardinal sins of reaching for the pylon, (sorry if this one stings N’Keal Harry) he decided to tuck it away and avoid a bigger hit and fell out of bounds. It ended up working out anyway, as he was awarded the score, but it was nice to see Newton make the right decision in keeping his health rather than reach for a touchdown that we probably could’ve gotten anyway.
As long as we keep seeing Newton making these smart decisions when it comes to protecting himself as a runner, I have little to no concern of his health. This Sunday was a different one for obvious reasons. But with this new style of offense, and a quarterback with an entirely different skillset, I’m excited to see where this goes.