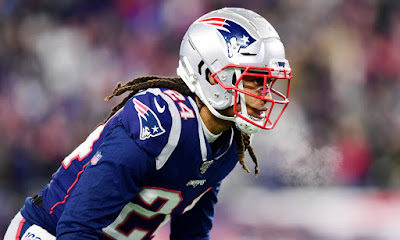 (Brian Fluharty/USA Today Sports)
It goes without saying that this past offseason for the Patriots was one of the worst of this century. Forget the obvious and most remarkable loss of Tom Brady, the defense lost upwards of 10 key players.
Off the top of my head I can name at least 6 or so starters from last years defense that did not suit up for the Patriots in week 1 yesterday.
Not only did the Patriots lose big names such as Kyle Van Noy, Jamie Collins, Elandon Roberts, Duron Harmon, and Danny Shelton to trades or free agency this past spring, but also had to incur the losses of long time Patriots and Super Bowl heroes Dont'a Hightower and Patrick Chung.
Hightower and Chung joined the likes of a couple lesser names who opted out of the season due to the coronavirus.
I respect the decisions of these men, but back in the early days of summer, the Patriots defensive depth chart looked pretty abysmal. They certainly addressed some needs through the draft. But even then, how much impact could a handful of young late round rookies make?
After the spectacular showing yesterday, though, I'm a little more confident in this group. The secondary is still elite, easily best in the league. We have the best defensive player in the league in Gilmore, obviously. And J.C. Jackson opposite him is literally another top 5 cornerback in the league and one of the most underrated players in the league. The duo each had an interception yesterday.
I'm still a little weary of the front line however, there's not much talent or depth there. Definitely hoping Winovich can make a leap from his rookie to sophomore year.
The Patriots get a real test early in the season next Sunday night against a familiar foe, the Seattle Seahawks and Russel Wilson, who pack one of the most electric and dangerous offenses in the league.
Twitter and Instagram @NickRufo21