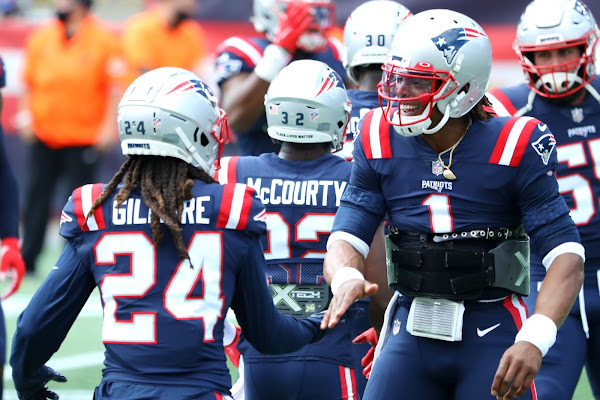 Maddie Meyer/Getty Images The Patriots played their second game of the year in Seattle tonight. The Pats lost tonight 35-30. THe Patriots are now 1-1 moving into a game against the Raiders next sunday. Overall, I liked the Patriots game tonight. Seattle is a tough matchup and the Patriots played well minus a few plays. Cam Newton led the Patriots is passing tonight going 30-44 for 397 yards, one touchdown and an interception. Newton also led the Patriots in rushing with nine carries for 36 yards and a touchdown. Julian Edelman led the Pats in receiving with 179 yards on eight receptions. Russell Wilson led the Seahawks in passing going 21/27 for 288 yards, five touchdowns and one interception. Chris Carson led in rushing with 16 carries for 69 yards. D. Metcalf led the Seahawks in receivng with four recpetions for 92 yards and one touchdown. Overall I'm not that upset about the loss tonight. Going into Seattle, with or without fans, is a difficult task. I love what I saw tonight. When the Pats needed it most, Cam Newton came through. He led the Pats to the one yard line and almost a victory. Despite all of that, Cam Newton and the Patriots offense are still adjusting to playing with each other. Going forward, I like the Patriots to go on a winning streak. THe Pats have Las Vegas Raider, the Chiefs, Broncos, and 49ers coming up. I cant wait to watch Patriots football going forward.
Follow me on twitter: @nicseeley12