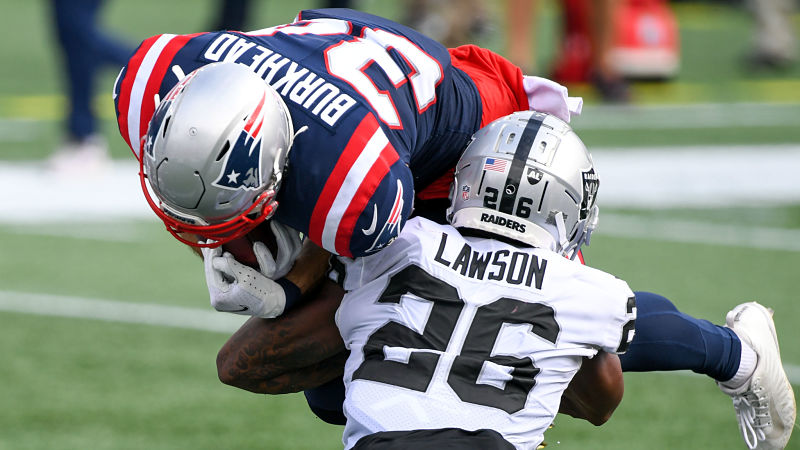 (Nesn.com)
The Patriots running backs ran all over the Las Vegas Raiders in a 36-20 victory to advance to a 2-1 start to the season for New England.
Although the Patriot offense had a slow start in the first quarter, defensive turnovers and Nick Folk field goals kept them afloat.
The New England ground game really got going as the game developed, with Sony Michel rushing for over 100 yards, J.J Taylor was spark plug when he needed to be and Rex Burkhead had himself a blowout day. Burkhead had three touchdowns (two on the ground, one receiving) and nearly one hundred all purpose yards.
Cam Newton went 17/28 for 162 yards and a INT and TD as well. Newton also tacked on 6 carries for 28 yards including a big first down run.
With the exception of some garbage time yardage, star tight end Darren Waller was a non-factor this afternoon as the Patriots' D threw an assortment of different coverages at him.
Derek Carr went 24/32 for 261 yards and 2 TDs while Hunter Renfrow led the Raiders with 84 yards and a late TD.
The Pats will now look to Arrowhead and the defending Super Bowl champs in the Chiefs for a primetime matchup next Sunday afternoon.