Patriot Performers of the Game (Week 3) 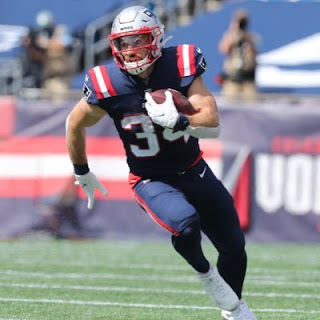 \
The Patriots prevail at home over the Las Vegas Raiders 36-20.
What a game this was! I was yawning throughout the entire first half but the offense and defense finally figured things out in the locker room and came alive in the second half.
All of the running backs had a day today. Rex Burkhead led the way with 49 rushing yards for 2 touchdowns, and added a team high 7 receptions for 49 receiving yards and another touchdown. He was the catalyst of the offense with highlight play after highlight play.
J.J. Taylor subbed in early for Sony Michel and provided some much needed life to an otherwise dead offense in the first half. Taylor finished with 43 yards on a team high 11 carries. He was running hard all day and you can tell he is really trying to make a name for himself on this roster.
After seeing the up tempo play of Taylor, Sony came back in and stole the show. He broke off a 38 yard run, which was then the longest of his career. A few drives later, he found a huge hole and had another massive run of 48 yards, breaking his own record just a couple carries later. Michel finished the day with a game high 117 yards on only 9 carries.
The running backs led the way for the offense, but the game wouldn't have been won if it wasn't for the defensive line. Chase Winovich, Lawrence Guy, Shilique Calhoun, and Deatrich Wise Jr. were just a few names who made incredible plays today. The Patriots defense forced and recovered 3 fumbles today. Wise sealed the deal on a strip fumble in the endzone which gave the Patriots their last score of the day. Wise, Wino, and Calhoun all recorded sacks as well today.
Overall this game was a complete different offense and play style than what we saw last week against Seattle. I'm fine with whatever way we can get the job done and get in that win column.
The Patriots get a real test next week against rival and defending Super Bowl Champions, the Kansas City Chiefs.
Twitter and Instagram @NickRufo21