Patriot Performers of the Game (Week 9) 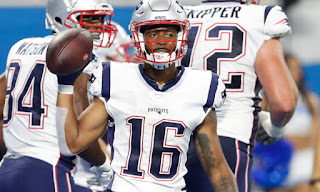 (Danny Jaillet)
All I have to say is, thank God.
Finally. Finally a nail biter game goes the Patriots way on the last play of the game this season.
The Patriots defeated the Jets 30-27 on a game winning 51 yard field goal.
First off, the Pats were playing second and third stringers on both sides of the ball tonight. On top of all of their COVID opt out starters, Stephon Gilmore, Julian Edelman, Ja'Whaun Bentley, Lawrence Guy, and N'Keal Harry were all inactive tonight with injuries.
Those are our three best defensive players on all levels of the field and our two best weapons on offense missing from this game.
BUT, even still, the Patriots still should not have almost lost and let the Jets contend all night long. There is no excuse. A win is a win, but they should be ashamed of the performance they put on tonight to the league's worst and only winless team.
The team was carried by four players on offense. Cam Newton finally had a good day. He was 27/35 passing for 274 yards, and even completed his first 19 attempts in a row. His favorite target tonight was Jakobi Meyers, who had a hell of a day and easily his best in his short NFL career. Meyers had 12 catches for 169 yards as the top receiver on this team.Cam also added 16 yards rushing and 2 touchdowns on the ground.
The ground attack was led by Damien Harris and Rex Burkhead. Harris was productive on first and second downs, he finished with 71 yards on 14 carries. Rex had 56 yards and a touchdown on 12 carries., an also recorded 3 receptions.
J.C. Jackson made the play of the game coming up with his fourth interception in as many games that set the Patriots up to tie the game at 27 with a couple minutes left in the fourth. It made up for what was an otherwise lackluster day for Jackson.
Deatrich Wise Jr. had the lone sack on the Jets last drive that forced them to punt back to the Patriots with 50 seconds left and set up the game winning score.
And lastly, I rip on him all the time because, well, he sucks, and he screwed us big time last year. But Nick Folk obviously deserves some credit hear. He was 3/3 on field goals today and obviously hit the long game winner.
A tough task is in store for the Patriots as they travel to Baltimore for another primetime matchup next Sunday night.
Twitter and Instagram @NickRufo21