Patriot Performers of the Game (Week 17) 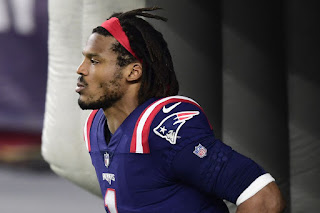 (Photo by Billie Weiss/Getty Images)
The Patriots wrap up a disappointing season with a 28-14 victory over the Jets.
Cam Newton finished strong and led the day with 242 yards and 3 touchdowns through the air. He also added 79 yards rushing, and a receiving touchdown on a trick play. Easily one of Cam's best games all season/. As much as he frustrated me this season, his leadership and work ethic was unmatched and I am glad to see him go off on a high note.
Jakobi Meyers finished his first breakout season strong with 6 catches for 68 yards and was the passer on the trick play to Cam newton.
Devin Asiasi, one of the first selections by the Patriots in the 2020 draft, caught his first career touchdown pass today, and finished with 2 receptions for 39 yards. Hopefully we see a lot more of the young tight end in the Pats future.
Sony Michel continued to look like his rookie self, rushing for 76 yards, and also added 3 catches for 60 yards, and the first receiving touchdown of his career.
The defense looked poised all game long. Darnold got sacked multiple times, twice by Winovich and once by Adam Butler.
J.C. Jackson recorded his NINTH interception this season. Still a joke he was snubbed from the Pro Bowl. Jonathan Jones also picked off Darnold in the endzone today.
A disastrous season for sure, but always good to go out with a win. The Patriots future is very foggy, and this will probably be another one of those offseasons with a ton of roster turnover. We'll be here covering it all. Until then, go Tom and go Bucs.
Twitter and Instagram @NickRufo21