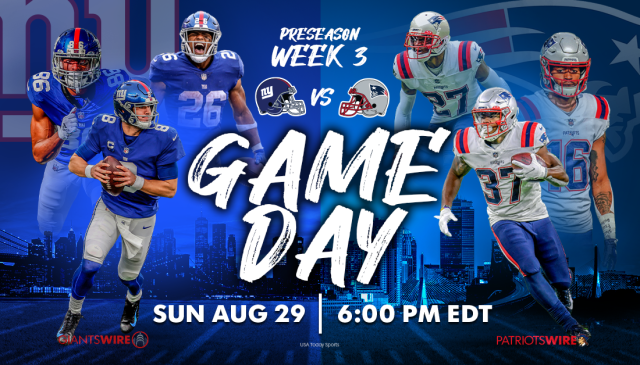 (Giantswire.usatoday.com)
The Patriots wrapped up their preseason finale in New York, with a 22-20 win over the Giants. New York made it interesting at the end, as Mike Glennon tossed a near hail Mary with 8 seconds left to cut the lead to 2, but failed to convert their conversion attempt.
The quarterback competition seems to be decided for the Pats, as Cam Newton started a pair of series with the starters before getting the rest of the night off. Mac Jones got the bulk of the work tonight, going 10/14 for 156 yards and his first throwing TD as a Patriot.
Cam went 2/5 for 10 yards and threw an interception but only at the phenomenal play of Giants linebacker Blake Martinez. Tonight did have more notable starters taking the night off, as a lot of backup guys had their chance to prove themselves and fight for a roster spot with the team.
J.J Taylor continued to prove why he has likely locked in a roster spot, getting 76 yards on 9 carries, and rookie Rhamondre Stevenson continued his impressive start to the preseason with another touchdown in a tight redzone situation. TE Devin Asisi and WR Kristian Wilkerson made some noise on the offensive end, both getting 4 catches for 72 and 64 yards respectively.
The defense continued to look as if they will be a top 10 unit in the league, especially the front seven, getting a big goal line stop in the first quarter. There has been nothing to update on the Stephon Gilmore front, so expect some sort of news to develop on that story in the coming weeks, as the Pats don't open up against the Dolphins until September 12th.
Overall, it was a very solid preseason for the Pats, finishing 3-0 which included a very great QB battle between Cam and Mac. As of right now, Cam Newton will most likely be the week 1 starter, but Mac Jones will most certainly be on his heels for the remainder of the season.
The Patriots have until this Tuesday to cut their roster down to 53 players, so Bill Belichick and his staff have quite the job ahead of them, as there are several tight roster battles. Unfortunately there might be some good players let go, but thus is the nature of the league.
The next time we see the Patriots will be the home opener against the Miami Dolphins, as the 2021 season is finally underway!