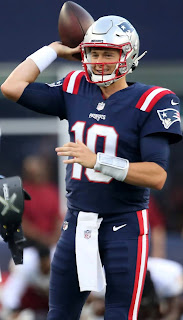 The Patriots lost to the Dolphins in the home opener of the season 17-16 depressingly in the last minutes of the game.
Mac Jones looked stellar and very poised in the pocket in his NFL debut. He threw for 281 yards and a touchdown and completed 29/39 passes. Over and over he made throws under pressure on third down and kept the Patriots in this game. Certainly a great sight to see from the future star.
Damien Harris started the game off hot with a 40+ yard gain on the first play of the game. He finished the day with 23 carries for 100 yards and 2 catches for 17 yards, albeit fumbling the ball on the 5 yard line in the closing minutes of the game.
Jonnu Smith and Nelson Agolor were Mac's early season favorite targets, reeling in 5 of 7 targets for 42 yards and 5 for 73 and a touchdown respectively.
Jonathan Jones came up with the first turnover of the season for the defense on an impressive collection on a batted pass which lead to a thorough Patriot's drive.
The Pats look to get their first win next week against the abysmal Jets on Sunday at 1 pm.
Twitter and Instagram @NickRufo21