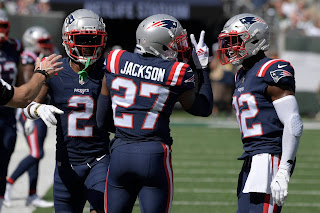 (AP Photo/Bill Kostroun)
The Patriots get in the win column for the first time this season as they easily handle the New York Jets 25-6.
Defense was the story of the day, as the defensive backs corps came up with 4 total interceptions. The front line forced rookie Jets QB Wilson to be flustered all day too, as he was sacked 4 times too.
McCourty, Phillips, and Jackson were the pests on defense coming up with interceptions, J.C. with two on the day.
The offensive tempo was modest. The Patriots controlled time of possession all game long but did not make New York pay for it as badly as they could have. Most drives resulted in field goals. Kicker Nick Folk cashed in all 4 of his attempts, with his longest coming from 49 yards out.
Mac Jones continues to shine and looked poised as a rookie. He completed 22/30 passes for 186 yards an no turnovers. The numbers don't jump off the page but you can just tell from watching he is very good under pressure and he did exactly what he had to do to come out of this game with a win.
The highlight play of the day came on the ground when running back Damien Harris broke at least 5 tackles in a row for a 37 yard run that resulted in him bulldozing his way through Jets defenders into the endzone.
New England looks to add to their win total next week with another 1 pm matchup against New Orleans.
Twitter and Instagram @NickRufo21