Patriot Performers of the Game (Week 10) 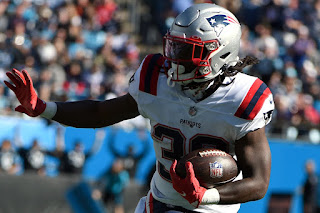 (Lance King/Getty Images)
The Patriots ended Sunday afternoon with an emphatic blowout win over the Cleveland Browns by a score of 45-7.
Leading the way for the Patriots offense were the rookies. Young star Mac Jones finished the game with 198 yards and 3 touchdown passes while completing an incredible 19 for 23 passes. I say it each week but Mac just keeps on getting better and better. It is crazy to see how much he has improved in half a season.
On the ground fellow rookie running back Rhamondre Stevenson had 20 carries for 100 yards and 2 touchdowns of his own. The first breakout game for someone that might become a household name. The Patriots drafted him early which says a lot about how they view him.
Leading the way for the receiving corps was the duo of Kendrick Bourne and Jakobi Meyers. Each finished the day with 3 receptions for 90+ yards and a touchdown catch. Meyers TD was the first of his career, long overdue. Bourne also added 43 yards rushing on 3 attempts.
Newly acquired tight end Hunter Henry continues to be a ball magnet as he finished the game with two of his own touchdown catches, adding to a high total on the season already.
The defense went berserk yet again on all levels. They finished the day with 5 sacks and an interception allowing less than 150 yards thru the air and 100 on the ground.
This team is an absolute wagon and a force to be reckoned with. If it weren't for a couple late game mistakes like a fumble on the goal line or a missed FG in a monsoon, this team is at the top of the league.
The Patriots look to keep their winning streak alive against an absolute pitiful Falcons team on Thursday night that just got beat by 40 points.
Twitter and Instagram @NickRufo21