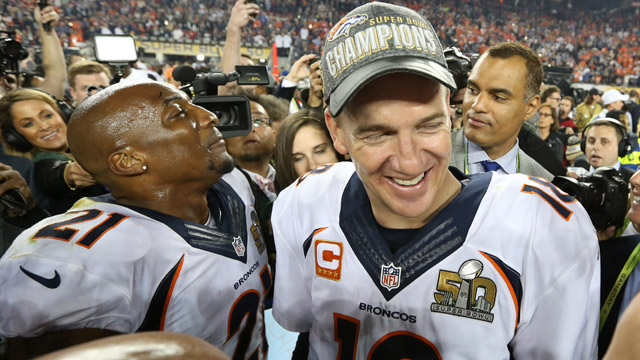 Aqib Talib has been fortunate enough to play with both Tom Brady and Peyton Manning, but it's Manning that Talib sees as the greatest quarterback of all time. The video below explains it all.

You can't really fault Talib for saying what he said about Manning, seeing as they're still teammates (for now) and just won a Super Bowl together. It would've been worse if he trashed Brady, but he had nothing but good things to say about the Patriots quarterback.

Talib has been pretty outspoken since joining the Broncos, so this is pretty mild compared to what usually comes out of his mouth.

Speaking of Manning, he hasn't had it all that easy since winning Super Bowl 50. The future Hall of Famer is marred in two separate big-time controversies - the Al Jazeera HGH allegations and having his name tied to a lawsuit against the University of Tennessee for having a "hostile discriminatory sexual environment for female students." Manning, as you may know by now, was accused of (to be blunt) teabagging a female trainer while he was a student at the university.

Because of the latter, UltraViolet, a women's group that advocates for women's rights, is calling for sponsors to drop Manning.

Despite the fact that Manning's act had been public knowledge for years, it's become a national story due to the lawsuit. Of course Manning doesn't look good in any of this, and it wouldn't be surprising if any of his sponsors cut him.