Are the Pats the leading candidate to land RB Matt Forte? 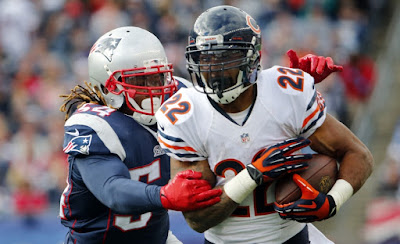 Running back Matt Forte is set to hit the open market.

The soon-to-be-former Bears RB posted on Instagram thanking fans for the last eight years in Chicago, and he'll be one of the most sought-after backs on the market this offseason for his ability to serve as a dual-threat option out of the backfield.

But how much does he have left in the tank, and is it enough for the Patriots to bring him aboard?

Forte will become an unrestricted free agent on March 9, and as these things usually go, the allure of the Patriots organization and their constant winning draws just about every veteran player to Bill Belichick like moths to a flame. Forte is no different, and the fact that the Patriots could use some reinforcements in the backfield after seeing the position kill them towards the tail end of 2015, and there could very well be a match made here.

If we're led to believe that Forte is in fact willing to take less money because he just wants to win, the Pats would have no problems meeting those demands. However, a certain number of fans don't want to see the Pats commit any kind of dollars or years to Forte, mainly because he isn't the running threat he once was, and as for the pass game, the returning Dion Lewis already fills that roll, never mind having James White as an option.

In eight seasons as a pro, the 30-year-old has rushed for more than 1100 yards just twice, and in 2015 he set career-lows in rushing yards (898) and yards from scrimmage (1287), but he did so having missed three games due to a knee injury. People are concerned about handing Forte a multi-year deal when he could be on the verge of a steep decline as he plays into his 30s, which may have already begun,

Do you want to see the Patriots sign Matt Forte?