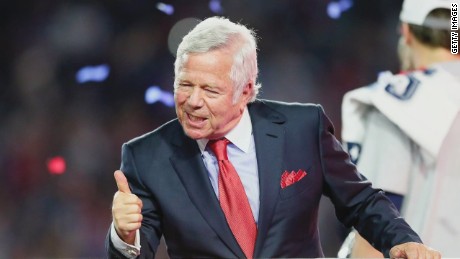 File this one under the complete bullshit category. Patriots owner Robert Kraft said he didn't hear Tom Brady being booed at Super Bowl 50. Brady was there as part of a pre-game celebration of past Super Bowl MVP's.

“I mean, to us, we didn’t hear it,” Kraft said. “We just heard loud noise and I just heard cheers everywhere around me. I didn’t find out what people — all the social media chatter, and I think there were a lot of Denver fans and Raider fans in the audience since it was so close. I don’t know. I think they see us as a big rival.

“He is such a classy, wonderful guy. He went there representing our team, our coaches, our fans.”


I'm not sure how Kraft couldn't have heard the boos. With a large Denver crowd on hand, as well as smatterings of Panthers fans, his story isn't really all that believable. It's probably just a cover-up.

Kraft was also asked about the media's handling of Peyton Manning's HGH accusations compared to the coverage Brady received during Deflategate, and he threw a little bit of shade at the Manning brothers.

“Well, I’ll let you and all the media experts opine on that,” Kraft said. “I happened to see Archie [Manning] there. He has two sons now who have won two Super Bowls, but with all due respect, we’ve got one son who has won four.”