UPDATE from our friends at BetPhoenix.
Super Bowl 51 is steamrolling towards us. The game kicks-off on Sunday, Feb. 5, at NRG Stadium, home of the Houston Texans. Reliant Stadium’s lone other Super Bowl was one of the wildest in game history, with the Patriots knocking off the Panthers 32-29 in Super Bowl XXXVIII. (We’ll have to see if the roof will be closed this time.) Now let’s find out who are best betting picks to win Super Bowl 51 are. Read more... 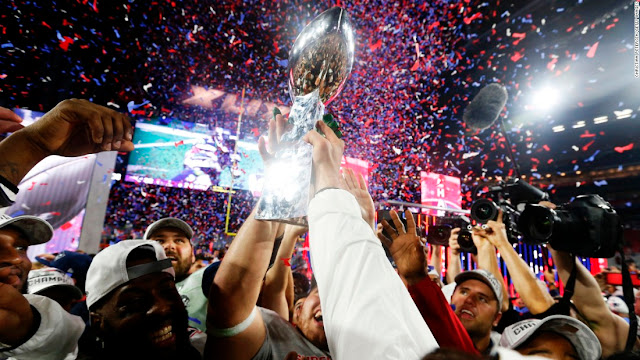 Yeah, yeah the Broncos won the Super Bowl, blah blah blah who cares we're on to 2016.

Coming off the big game in Santa Clara, sports books across this great land of ours delivered the numbers for Super Bowl LI yesterday (we're back to Roman numerals folks) ...and we've already seen the numbers change in favor of our New England Patriots.

After Bovada.lv opened the numbers as the Patriots, Panthers and Seahawks all as co-favorites at 9/1, the Pats now stand alone as 7/1 favorites, while the grouping of the Seahawks, Steelers and Panthers are all listed at 10/1.

The Panthers are now listed as 11/1 favorites, while the Denver Broncos are at 14/1.

The Patriots have very few holes on their roster, and they essentially have zero on the defensive side of the ball. On offense, the line needs to be reworked and get healthy, while the team needs to focus on shoring up the backfield and bringing in a legitimate outside receiver. Other than that, the Pats are in line again to win 12-13 games, lock up another first-round bye and make up half of the 2017 AFC Championship Game (again).

Hopefully homefield advantage throughout comes along with it.