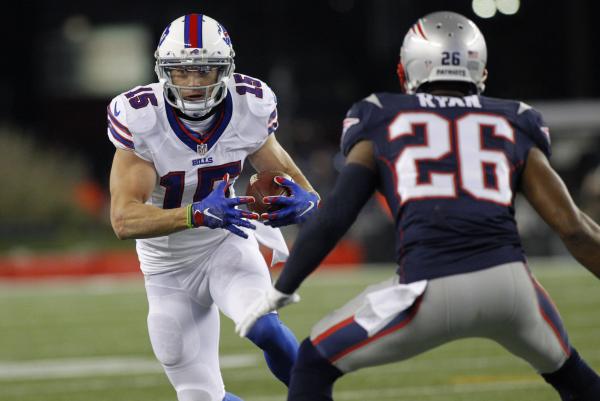 In a conference call with the Boston media last week, Hogan began by talking about what it meant to him to sign with New England:

"It was a very surreal feeling. I’ve always looked up to watching them play,” Hogan said today during a phone conference with local media. “They’ve been a team that has a long history of winning. Just to be considered a part of this team is a great honor. I’m still letting it all sink in. This is an awesome opportunity for me.”


On working with Tom Brady:

“I know that communication is huge in this league and (with) Tom,” said Hogan, a restricted free agent who was signed after the Bills failed to match the Patriots' offer sheet. “This whole process and just signing with the Patriots has just unfolded. It’s just getting set now. I’m looking forward to getting in the building and being around the guys, getting to know the guys, and getting to know Tom. It’s all very exciting.”


On being a "prototypical" Patriot:


On his growth as a player in the NFL:

“I have grown so much since I’ve started in this league, and it’s something that I feel every single year," he said. "I’m always growing, I’m always learning. I almost tell people sometimes I’m still new to this sport. I like to approach it that way, that there’s still so much for me to learn, and there’s still so much for me to grow as a receiver and as a football player. Every single year is a year for me to take a look at how I’ve grown and how I can get better, and better myself as a football player, as a receiver, and just as an overall team player.”


On his success as an opponent against the Pats:


How will he fit into the offense?