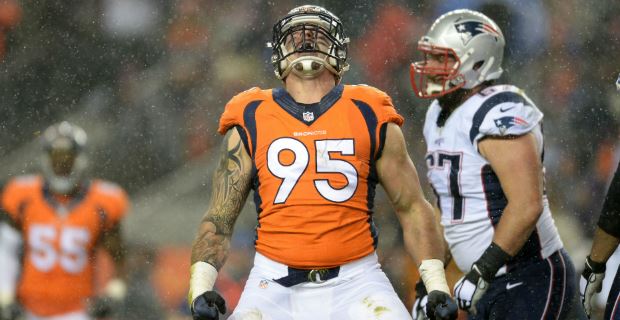 Derek Wolfe is a weird dude. Last week, Broncos safety T.J. Ward was a guest on ESPN's "Highly Questionable" and touched on the absurd things that Wolfe sometimes says, including the time Wolfe told Tom Brady he'd eat his kids.

“Wolfe, he says some things that are highly questionable,” Ward said. “He doesn’t really say too much. His presence, he’s a dog on the field and he really doesn’t take any mess from anyone. Having him there up front, he set the tone for us. Between him, Malik (Jackson), (DeMarcus Ware) and Von (Miller) — that’s a nice front four for you.”

So what does Wolfe say that’s “highly questionable?”

“I heard him hit somebody with the Mike Tyson,” Ward said. “He told someone he was gonna eat their kids. … That was an opposing player. That was, um, Tom Brady. I think he told Tom Brady that.”


Sooooooooo yeah. Gotta say, that's one of the weirder things I've ever heard. But at least it's creative.