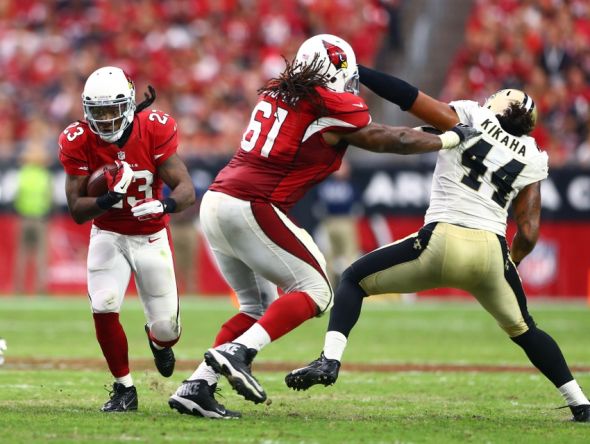 I admittedly did not know too much about guard Jonathan Cooper prior to the Patriots landing him in the Chandler Jones trade, other than that injuries had played a large role in derailing the still-young career of the former top 10 pick. I decided to do a little bit of research on Cooper, including a look at game film from two of his 2015 starts, to see what kind of player the Pats had added to their interior line rotation. Here are my takeaways.

Cooper was drafted by the Cardinals with the seventh overall pick in 2013. As the highest drafted guard since 1986, Cooper carried high expectations as a player expected to turn the tide for the perenially bad Cardinals offensive line. Instead, a broken fibula landed him on season ending injured reserve just three preseason games into his rookie season.

His rookie season ending before it started was certainly disappointing, but many expected a breakthrough season from a player regarded as a rare talent coming out as a draft prospect. However, injuries derailed his second season as well, as he seemed to come out of the gates slowed by his recovery from that broken leg. He had his knee drained during training camp and was revealed before the start of the regular season to be dealing with a "significant" turf toe injury by GM Steve Keim. Cooper played through the injury but was limited enough to be beaten out by journeymen Ted Larsen and Paul Fanaika for the two starting guard spots. He would get his first starting experience in Week 14 thanks to an injury to Fanaika, but a wrist injury sent him back to the bench after making just two starts during his second season.

Finally healthy, Cooper was a began last season as a starter for the first time in his career. While there were flashes of the talent that made him such a highly touted prospect coming out of college, there wasn't enough consistency for coach Bruce Arians liking, particularly in pass protection, where 60 guards allowed less pressure on a per-snap basis, according to PFF. A knee injury suffered in Week 10 opened the door for Larsen to take his place in the starting lineup, and the veteran journeyman held on to his starting job for the remainder of the season. Overall, Cooper started just 11 games in the two seasons following his lost rookie year, and was traded amid whispers that he might be moved to center in a make-or-break fourth season with the Cards.

The Patriots offense typically values athleticism and quickness over pure bulk and power. Interior offensive linemen are required to be mobile, as the Patriots run plenty of screens, traps, and other plays that require their guards to pick up moving targets, often at the second level. Athleticism and mobility in the running game were amongst the traits that drew them to last year's fourth round pick, Shaq Mason, and they're calling cards of former tight end Nate Solder's game as well.

With that said, it's no surprise that Cooper was reportedly considered a blue chip prospect by the Patriots organization back in 2013, as the 6'2", 312 pound Cooper possesses rare movement skills for a man his size. That athleticism was flashed regularly on tape in 2015, where Cooper often made getting to linebackers at the second level look effortless.

Here we see Cooper (right guard, #61) recognize that cornerback Lamarcus Joyner is blitzing from the slot. Cooper effortlessly shuffles out to the edge like a tackle to meet the speedy corner and stop him in his tracks.

Here, he crosses the face of former first round pick Michael Brockers in order to get to the second level, where he shows impressive footwork to cut off the angle of linebacker Alec Ogletree. The play gets blown up on the otherside, but Cooper executes his assignment in impressive fashion against one of the most athletic linebackers in the league.

Here, we see him get out on the move and cut CJ Mosely, one of the league's better inside linebackers, in the open field. No easy feat.

Obviously, the biggest knock on Cooper so far has been his ability to stay healthy. It's difficult to call an evaluation anything but incomplete when a player has only managed 11 starts in three seasons.

However, Cooper's pass protection was inconsistent last year, his first with regular playing time. Given his reputation as a super athletic guard and pass protection stalwart coming out as a prospect, he's given up far too much pressure so far in his career.

On the bright side, the tape shows plenty of positive flashes in this department as well (such as the snap shown bellow against DPOY candidate Aaron Donald). Cooper's naturally quick feet are an asset in protection, and he uses his length pretty well to keep opposing rushers at bay. He also has a wide, squatty base which he uses well to catch and anchor against the bull rush. Cooper isn't regarded as a power player, but he's certainly not power deficient (he had enough strength to do 35 reps of 225 pounds on the bench at the 2013 combine). There were plenty of snaps on tape on which he controlled his man from start to finish of the rep.

With all that natural ability, why the occasional struggles? The simple answer is shaky technique, much of which goes back to his lack of playing time in Arizona. Cooper too often allows the defender to get inside or outside leverage, allowing them to attack one shoulder and negating his strong, wide base. Such an example came here, against (of all people), Chandler Jones' new replacement Chris Long. Cooper leans too far outside on this play and the veteran Long takes advantage with good hand usage to beat him inside for the sack.

Normally, such technique issues would be alarming for a player entering his fourth season, but Cooper is essentially still a rookie when it comes to live NFL experience. The good news is those kind of issues are correctable, and Cooper will know have arguably the best in the business in Dante Scarnecchia coaching him up. Coach Scar has consistently gotten the most out of less talented prospects by hammering home proper technique. It will be interesting to see what he can do with this kid, who undeniably has all the physical tools you'd want in a Patriots guard.

With that said, Cooper is hardly guaranteed playing time in New England. Instead, he adds another body to what figures to be a ferocious training camp competition for reps, joining Shaq Mason, Tre Jackson and Josh Kline. While all three of those players were members of a line that failed to live up to expectations in 2015, all three showed plenty of reason for optimism going forward. Kline was a steady, reliable starter until late in the season, when a shoulder injury seemed to limit his effectiveness. Mason flashed tremendous upside as a run blocker, but predictably struggled in protection in his first season removed from Georgia Tech's option offense. He's another guy who should benefit greatly from the presence of Scarnecchia, who should help him improve his technique dramatically in protection. Jackson didn't flash the way Mason did, but he was also the steadier player, particularly in protection. Regarded by most as a Day 2 talent last year, Jackson is less mobile but bigger and more powerful than his peers in this competition, and he'll have to generate more movement in the running game going forward.

At the very least, Cooper adds a capable depth to that competition. We all saw the value of depth last season, when Jackson, Mason and Kline all missed time at various points of the season to injury. Perhaps with that in mind, the Pats rotated their linemen judiciously throughout the season, giving all of their young players the opportunity to develop. Cooper should have every opportunity to get at least some time on the field.

Acquiring him really becomes a home run if Scarnecchia can connect with him and unlock the potential that made him such a heralded prospect. While all three incumbent players have given you reasons for optimism, Cooper is clearly a step beyond them with regards to pure physical talent. When he's on, he combines the strengths of Mason (athleticism in the run game) and Jackson (pure bulk and power) in an impressive, imposing package. A fresh start with a legendary coach and an offense tailor made to fit his strengths could be just what the doctor ordered for this former top 10 pick to get his career back on track. We'll just have to wait and see.