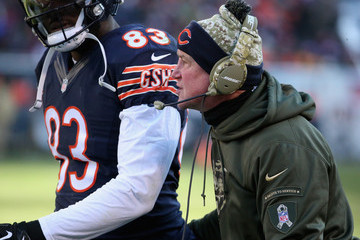 Per Phil Perry of CSNNE.com:

"Very talented, big body, good in-line blocker," Fox said of Bennett. "I think in their case, when you start looking at who they could put him next to, I'm sure that excited them. I'm not going to talk to Bill [Belichick] at length about how he's going to play him or what they're going to do with him, but he's got skins on the wall. He's got good production."

"He's got personality . . . He's a nice young man," Fox said. "He's got an interesting personality, for sure. It's not malicious or bad. He's a great kid."


Bennett's off-field behavior has been an issue in the past, but Patriots head coach Bill Belichick has a knack for getting troubled players to shut up and play. Bennett, who was acquired from Chicago for a fourth-round pick in the upcoming NFL Draft, is expected to create the kind of dual tight end threat the Patriots employed with Aaron Hernandez and Rob Gronkowski from 2010-2013. Gronk, of course, is still on the team, but Hernandez is most likely spending the rest of his life behind bars.