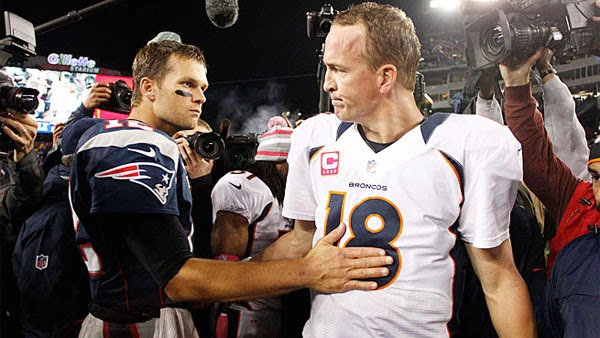 For all the crap Patriots fans have given Peyton Manning over the years, he's apparently going to miss them. The now-retired, future Hall of Fame quarterback said as much at his retirement press conference yesterday.

Per Darren Hartwell of NESN:

“I’ll even miss the Patriot fans in Foxboro,” Manning said, via ESPN.com’s Mike Reiss. “And they should miss me, because they sure did get a lot of wins off of me.”


Manning isn't shy about his record against Tom Brady and the Patriots. Since Brady became the Patriots' quarterback in 2001, Manning carries a record of 9-13 against Brady overall (this includes the playoffs), and a 2-11 record in New England all time.

While Manning has received an overwhelming amount of support from his NFL peers and fans alike, Steelers running back DeAngelo Williams wasn't so kind.

Williams trashed Manning, saying he was awful this past season.


Look Peyton is a hall of fame qb who couldn't play dead in a western last year but career over all is astonishing but last year was 💩😷
— DeAngelo Williams (@DeAngeloRB) March 7, 2016

Williams then went on ESPN's Mike & Mike radio show and clarified his tweets. Spoiler alert - he didn't back down.

Per Jesse Reed of Sportsnaut:

Williams claimed that some people have taken his tweets out of context, but he said his tweets about Manning being terrible last year were 100 percent true.

“I stand behind all my tweets. If I tweeted it and I said it, I am not apologizing for it,” Williams said.


Williams has tried to stay relevant through the off-season by tweeting a bunch of obnoxious nonsense. Back in February, Williams responded to a Patriots fan's tweet about playing in New England by saying only Brady likes Belichick and that Patriots fans root for "certified cheaters."