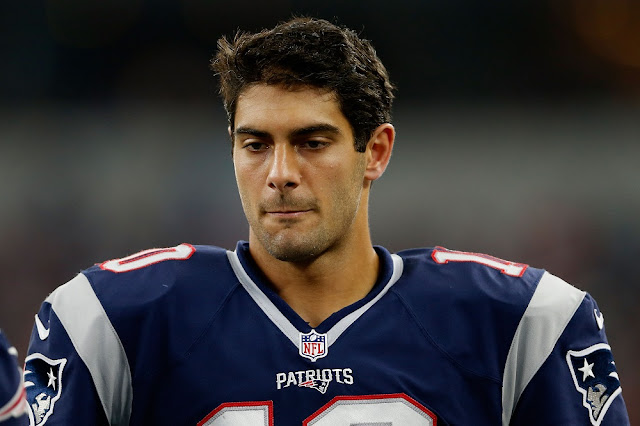 With Tom Brady's four-game Deflategate suspension being reinstated by a U.S. appeals court, the Patriots are going to be turning to backup quarterback Jimmy Garoppolo to start the first four games of the season.

On the surface, it seems like the Patriots aren't overly concerned. Head coach Bill Belichick was asked about Garoppolo in January and had high praise for the young signal caller.

"Jimmy has made great strides for us," Belichick answered. "The reps that he’s gotten on the field in preseason games and in practice, I think he’s shown a lot of development -- better understanding, quicker recognition and reading of the defenses, more awareness of what’s happening on the defensive side of the ball, better communication, better understanding of the offense -- really everything."


Should Brady's suspension hold and the Patriots are forced to go with Garoppolo to start the year, there is more than enough talent on offense for Garoppolo to use and be successful. I'd be shocked if the Patriots were at worst 2-2 by the time Brady gets back.

Garoppolo, who was drafted in the second round of the 2014 NFL Draft, was once looked at as Brady's successor. Whether or not he still is is up in the air. As of now, he's Brady's temporary successor and should get a heavier workload with the first-team offense in training camp. While Garoppolo struggled with getting the football out of his hands on time during the 2015 preseason, he went 61-for-80, throwing for 554 yards with two touchdowns and two interceptions.

Even so, the Pats seem comfortable with Garoppolo taking the reins for a couple games.

"He’s a hard-working kid who’s always prepared," Belichick said on Jan. 5. "It’s a tough position to be in when you don’t know if you’re going to play or not, but he prepares hard to play, we push him hard to be ready to play, and he’s made a lot of progress this year. As a football player, I think everybody has a lot of confidence in him based on the opportunities that he’s had to show what he can do and how he’s working."


Of course, Brady's suspension could be overturned if the full appellant court re-hears the case. Garoppolo may never see the field. But this time around, it looks more likely that Garoppolo will get out there in a meaningful game.