Tom Brady should take his suspension and get it over with 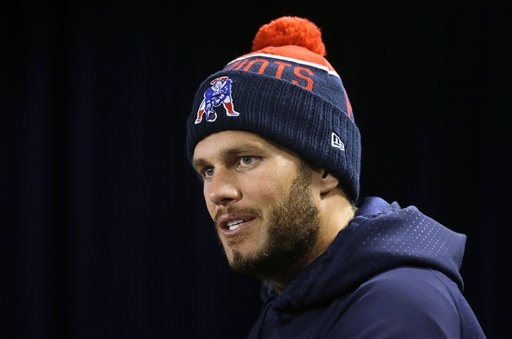 Tom Brady is once again suspended for the first four games of the upcoming season. Boo.

Nobody wants to talk about this anymore. I certainly don't want to be talking about it when the Celtics have an important Game 5 tonight in Atlanta and the Red Sox (who are ironically enough, also in Atlanta tonight) actually looked like a baseball team last night. But I digress.

Time to end this. Brady needs to stop fighting. Will he, though? No chance. He's currently going over his options with his legal team and will likely request for the full appellant court to hear his case. It remains to be seen if they will grant Brady a re-hearing, but it's looking increasingly likely that Brady will serve his suspension after all. He could also go to the NFL and try and get a settlement done, but that seems pretty unlikely when you consider how unwilling both sides were to go that route.

I, like many people, am beyond sick of hearing about this. We're now a year and three months into this ridiculous scandal and it isn't anywhere close to being over. Brady, the Patriots as an organization, Roger Goodell and the NFL all look bad in different ways.

Not that his legacy wasn't already in question, but by Brady continuing to fight this, that legacy will face even more questions. And by allowing this to drag on, Brady looks worse. He will continue to be scrutinized in the public, and he is consciously allowing this unbearable news cycle to continue. Even though this situation hasn't been about Brady vs. Goodell for some time now, he and the NFL Players Association are being made into an example. It's obviously ridiculous that Goodell has this much power, but that's the fault of the players for allowing him to have it.

I understand that he doesn't want his legacy to have even the tiniest stain on it. But it's time to think about what's in the best interest of the Patriots as a team. He is still undoubtedly one of, if not the greatest quarterback of all time. Deflated footballs won't change that no matter how much some people may want it to. I want to remember and talk about Tom Brady for his skills as a quarterback, not this extracurricular crap.

And while Deflategate is hands down the dumbest scandal in the history of the NFL, maybe even the history of sports, it is also the most insufferable to talk about. The fact that this is still news in April 2016 is truly astonishing. Brady has been unfairly punished for a crime that is equivalent to jaywalking. However, he can put an end to it by just accepting the punishment.

Anyway, ask yourself this, as I'm sure you did last year: let's say Brady has the case heard by the full appellant court and is somehow granted an injunction, meaning he can play while the case is being heard. The court decides to uphold the suspension and now he's out for four games in the middle of the season, missing games against a number of good teams including Cincinnati, Pittsburgh, Seattle, Denver, etc. What then? Wouldn't you rather have him miss the beginning of the year and not possibly miss important games later in the year?

Not having Brady out there in a meaningful game in late October, November or December could mean the difference between having a wildcard spot or home field advantage in the playoffs. Of course, not having Brady in the lineup at any point for four games could mean that, but it's less likely to be as big a factor early on in the year.

The best-case scenario for the Patriots, assuming his suspension sticks this time, is that he misses the beginning four games of the year. While Arizona is a tough draw, Houston, Miami, and Buffalo are all not nearly as good as the Patriots with or without Brady. I'd rather have him three games against inferior competition and then come back and shred the league like he always does.

He would come back in Week 5 when the Pats travel to Cleveland. On paper, that's a dream game for Brady to come back for. Cleveland sucks and Brady would have a field day with them.

Given the talent the Patriots have on both sides of the ball, there is no reason to believe that they can't go 3-1 or, at worst, 2-2 by the time Brady gets back. Would anyone complain with at least a .500 record with a backup quarterback through four games? Probably not. They were 2-2 with Brady at the helm through the first four games of the 2014 season and look where they ended up.

Assuming health, they will still have Julian Edelman, Rob Gronkowski, Martellus Bennett, Danny Amendola, Chris Hogan, Dion Lewis and a slew of other offensive weapons, what should be much better offensive line protection and a top-10 defense. That is more than enough for Garoppolo to succeed. And should Garoppolo put on a good showing, that means his trade value goes up. With the way teams pay ridiculous prices for quarterbacks, that might not be a terrible thing for the Patriots' future.

In a perfect world, Brady would never serve this suspension and we'd never utter another word about Deflategate ever again. But sadly, this is still news. It's not in Brady's nature to give up any fight, and he deserves credit for that. This, however, is one he should concede.