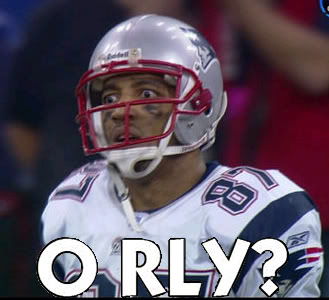 On top of being an awful wide receiver, former Patriot Reche Caldwell is an idiot for a lot of reasons. But you probably already knew that. He's so dumb, that he basically Googled his way to jail. When he was asked how he went from playing for one of the most pristine organizations in the NFL to being a drug overlord in Tampa Bay, he said...

In a feature set to come out in ESPN The Magazine on May 23, Caldwell's rise and fall is documented dating back to his college days at Florida. Caldwell is currently serving a 27-month sentence at FPC Montgomery, a minimum security prison inside the Maxwell Air Force base in Alabama. He faced charges for running a multi-million dollar gambling house in West Tampa Bay, as well as attempting to import and distribute what he thought was 5.5 pounds of the drug known as Molly.

Caldwell is best known in New England for two egregious drops in the 2006 AFC Championship Game against the Indianapolis Colts that in all likelihood, would have won the Patriots the game. Caldwell was released after that season and latched on the with the Redskins for a year, then finished his career with the Rams in 2008.

You can read the full article here.