Rob Ryan says the Bills will beat the Patriots this year 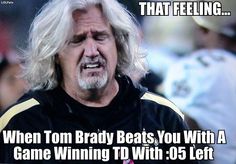 Another year, another bunch of nonsense from a Ryan brother. This time, it's not Rex running his mouth. It's Rob, and he sounds just as stupid as Rex does. Good ol' Robbie boy thinks the Bills are going to put a hurtin' on the Patriots this year.

"All the respect in the world for Bill Belichick. That was fantastic training, working for him for four years, and I learned a ton," Rob said, referring to the 2000-03 seasons when he was a Patriots assistant coach. "Look, [Belichick] is the No. 1 nemesis of every coach in this league. So it's not just Rex.

"Now, I think if you ask [the Patriots'] offensive staff, the worst they ever play is against Rex. People say, 'Well, [Rex] hasn't beat them [nine of the past 10] tries.' Yeah, well, [Rex] has beat the hell out of that [Patriots] offense. I am sure the respect is mutual.

"But I know one thing, we are going to beat them. We are together, we're going to beat the best. It's two against one. Him one-on-one against any coach in the league, that guy is pretty damn good. And he's also got his best buddy Tom Brady with him. He trained him, and he single-handedly made him great as well."


Hey Rob, did you know Rex is 4-11 against New England as a head coach? And if you're counting on having Brady out on Oct. 2, don't celebrate yet. He might be out there. If he is, you're not winning. If he's not, you still might lose anyway. Rex is probably butthurt about a lot of losses to the Patriots, and it's almost a guarantee Rob is still butthurt about this...

Rob, of course, is the Bills assistant head coach, so you'll see a lot of the two together this year. And as we've seen time and time again, it's usually not smart to talk a bunch of crap well before you even play a game. It's even worse to talk a bunch of crap well before a game against the Patriots. But then again, it's not like everyone in New England hasn't heard this narrative before. Rex (or Rob, in this case) shoots his mouth off and get his teeth kicked in. That's just the way it goes.

If nothing else, this will add some extra juice to both meetings between the Pats and Bills this year.